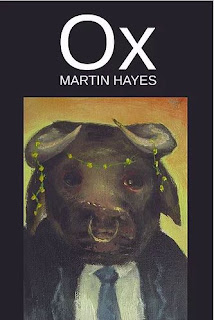 This is an intriguing development from Martin Hayes, a poet whose work has incessantly and almost ‘claustrophobically’ taken aim at the culture of the workplace where impractical time-management models and impossible deadlines, allied to the gig economy, have created increasingly hostile environments which seem to be a key feature of what we might still call late capitalism. Hayes’ critiques have a very human centre, a crie de coeur, you might say, while also providing an analytical underpinning. The intensity of his writing has led me to wonder how he’s going to take things further without repeating himself to the point of overkill. I shouldn’t have worried because his most recent poetry collection, Ox, reintroduces the idea of a fable, or perhaps an allegory, which strongly hints at Animal Farm, while also referring to Greek mythology and is also slightly suggestive of Ted Hughes’ reworking of mythical tropes. There are lyrical moments here as well, unusual in Hayes’ repertoire and amidst the anger and analysis there’s an underlying sadness which is at times deeply moving. This is a definite advance in terms of overall theme and structure and the fact that Ox could ostensibly be a book for children (with adults in mind) gives it a powerful focus which makes for an intriguing read which retains all the fire of his earlier work while opening up new possibilities. It’s his most literary book so far – and I mean that as a compliment – which includes powerful artworks by Gustavius Payne which add to the power of the central theme. While Animal Farm and perhaps 1984 are referenced in this dystopian thrust there is also the question of our relation to ‘the natural world’ which becomes more urgent in these troubled times and this is a topic which Hayes hasn’t really explored before in his work. While his ‘argument,’ if that’s the right word, remains essentially the same, this book is broader in its remit and therefore less one-dimensional in scope. It’s a compelling read for sure:

Ox was never going to understand

or that tears contain salt

because they come from pain

but you could bet your very last pound

that every ox out there in the fields

or sat inside their leaky barns

after their 11-hour shifts had finished

both theoretically and practically

what a hard day’s graft

This is succinct and direct and packed with punch but elsewhere Hayes includes a more musical element as evidenced in this introduction to Ox at Pompeii – ‘there was muscle there was music there was the dark mosaic in the eyes / reflecting the liquefied plains the scorched skirts of the mountain / rooted to the end of something else’ – without ever losing sight of his aim which is satirical and underpinned by anger and analysis. In Ox at the Gates of Heaven which is prefaced by a visceral and darkly descriptive extract from an American slaughterhouse worker Hayes is at his most forensic while also leaving space for some damning invective: ‘the white ceramic guttering of a Pol Pot’s throat / accelerating the rivers of blood / into the stomach of the Earth.’ This is followed by a listing which includes – ‘the lullabies / of a Marine Le Pen / then God’s final judgement / a bolt through the head for all / and a barcode slapped on your flank / to get you out of the gates of this Hell.’

In Ox in the Gig Economy, following the fairy tale introduction (‘once upon a time / a very long time ago …’) we are treated to a recreation of a more down-to-earth ‘golden age’ where although life was hard and uncertain there was a freedom of movement which paralleled Britain before the enclosures and the factory system. Here there is a degree of autonomy and self-determination no longer available in the current environment and Hayes’ use of the fable form at this point brings into focus, however sentimental it may appear, a serious critique of our industrialised world and its impact on all sentient life. Hayes is not providing answers here but neither is his rage inarticulate or lacking in control: ‘it wasn’t long before everywhere / was owned / and the oxen became trapped in fields / they hadn’t chosen.’

This is a collection which needs to be read and re-read to pick up the nuance and hints towards literary traditions, something new in Hayes’ poetry I think. It’s not always a comfortable read and veers between being on the verge of didacticism and approaching something more complex and questioning.

Ox and the Song of the Strong

Ox knew that he was strong

stronger than the mountains?

he knew that the universe was unravelling

that the rivers were pouring themselves

into the centre of a plastic Earth

that would soon leave everything behind

he knew he had strength though

that he could pull all of the stars back into place

push all the oak trees back into the sky

lift all of the oxen up off their knees

that his blood was thick with stamina

and would ever come again

and this is what enabled Ox to sing

because after everything had been and gone

it was only blood and strength

that would remain of him

This final poem has an elegiac quality which is also affirmative and combative in its determination to resist. If there’s a strong sense of masculinity about Hayes’ writing then this refers I think to a working environment which is largely male dominated yet there’s a lyrical note here which resonates in a much more haunting sense and is suffused with sadness. There is a complexity in such apparent simplicity which seems more three dimensional than Hayes previous powerful work and this makes me wonder where he’s going to go next.