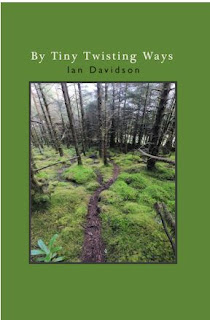 Ian Davidson’s new collection is a meditation on the relationship between language, landscape and the human subject. His use mainly of seven syllable lines with stanzas of three or four lines, create an unusual rhythmic pattern and there’s a minimalist aspect which has a very physical yet lyric feel. I’m reminded at times of the poetry of Peter Larkin, a very different poet to Davidson, but one who also deals with ‘difficulty’ around the subject of landscape, language and a non-traditional approach. Here we have an extract from the long opening poem Lumps and Bumps, a poem which also touches on the subject of cancer and a successful recovery from the illness, a central motif in the collection:

At sea all the broad beach a

call to prayers stretched as the whale’s

long in the sand and massive.

car wheels or the red hare through

and crocks of gold at varying

depths. Everything is up in

the air and deep water as

curls and lands, wiping its face

in a surface of sand, it’s

expression fleeting as a

ready to make an entrance. Wave

upon wave gathering then

There’s an immersion in the landscape which gives an impression of inclusion, where visual patterning is allied to an economic underpinning and a sparse, descriptive aspect which is at once ‘pre-human’ and physically ‘itself’ while also having an aesthetic resonance which makes it simply good to read, to enjoy and ponder. I’ve only recently become acquainted with Davidson’s poetry and this fusing of the lyrical with the analytical seems to be a continuous aspect of his writing, a question of making a home in a harsh but real environment, not exactly an alternative to the contemporary capitalist world which seems to be falling about our ears but there is certainly a challenge in his environmental writing which presents a different worldview from that of our increasingly virtual society.

The sun melts the sea. At the

horizon is a pool of

gold that widens as it

Silver then gold again, a

the shape of the waves, light

is all legs now becomes four

through a bank of cloud becomes

experience. At the base

of the cloud bank more fiery

as if a furnace is

breaking the surface of slag.

Again, there’s a description of an environment which is lyrical and celebratory yet which is combined with a hint towards the industrial and a (later) suggestion of war (‘military formation’), modern technology and imprisonment (‘cage’). This is rich territory which is diverse and multiple in meaning while retaining a sense of the lyric and the exploratory, a poetry which is quiet and pleasurable to read while also being quietly effective and political.