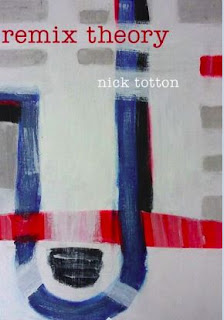 “Remix Theory” by Nick Totton, pub. Oystercatcher, 16pp.I can remember hearing somewhere that John Milton set out to read ‘everything that had ever been written’ prior to commencing work on Paradise Lost. Nick Totton’s remix theory is operating in a world where there is so much information available that your head is likely to explode with the diversity of material and the potential for endless interpretation. ‘All that noise as of the sea / it would drive you mad if you truly listened,’ as somebody else once said. Totton mixes the language of philosophy with that of brain science, with cultural theory, with Shakespeare and with a host of other approaches in a manner which is both playful and probing even though the end result might be that although we think we know a lot about a lot of things perhaps we don’t know as much as we thought we did. That, or ‘information overload’ gets your head into a spin. I thoroughly enjoyed reading this short ‘montage ’ although it’s hard to know how much material here is actually quoted or adapted, something which he himself puns around, as on page 9 where we have the following:

Remix is instead / concerned with the temporary, the borrowed: with bricolage, the

repurposing of / fragments. Not making the word one’s own, but making one’s own use of it.

Another key phrase here might be from the opening of ‘Reputed Flow’ (page 2) where we have a direct quotation from Borges (‘The second is one long metaphor for insomnia’), followed by ‘To connect the disconnected sectors is the game of jokes, dreams and poetry.’ Quite so, as Totton weaves in and out of a fascinating series of (apparent) interconnections, posing unanswerable (?) questions, mixing ‘languages’ and various forms of discourse in a manner which just about keeps the show on the road, even though it totters and stumbles in its oh so eloquent mish-mash. I’m sure I picked up tropes from Yeats and Auden who are not ‘attributed’ in the end-note references as well as Eliot, who is.

Totton is writing within a tradition of contemporary poetics which features assimilation and quotation, not always attributed, which includes poets such as J.R. Carpenter, Tony Lopez, Giles Goodland, Peter Finch, Rupert Loydell and others. He often appears to be ‘talking to himself’ in the sense of having an inner conversation about the nature of his project and the tone veers between high seriousness (mock?) and high humour:

Right now I’m at the dispersed end actually: Excuse me, is this prose, or am

I still in a poem? I am if I say I am: the kid stays in the picture, the baby in the

bathwater; Briar Rose stays dispersed in dreamless sleep until a kiss pulls back the

curtain, and the cold light uncovers her. What repair is possible, what undoing? Only

these fragments shored against her ruins, these samplings mixed and mixed again,

only this randomness, this blind probe ahead: a patchwork quilt for Briar Rose’s bed.

Again there is a sort of description of process and intent here, a serious discussion of literary ideas around ‘the imagination’ as commented on by more modern psychological and scientific approaches. The mixing of terminology proves very fruitful in its novelty and ‘destabilising’ function and is arguably a source of fresh vigour in a world where much contemporary poetry could be said to have run out of steam. The overall effect is both entertaining and stimulating if at times a little too mesmerising although this depends on how far the reader wants to take the game. There are so many references and quotations here which a reader may or may not have at least a passing acquaintance with and you can always use this as a prompt for further investigation. There is humour in this thought especially in relation to my comment about Milton at the start of this review.

The finale, Part 3 – Recency – is ‘a poem,’ laid out traditionally (as opposed to the preceding text) and which I suppose is a precis of the entire ‘argument’ of this chapbook, suggesting key themes such as ‘the tunnel’, interconnectedness, glass/gloss (etymology and science), washing machines, and ‘the imagination.’ This is one to think about and be stimulated by, a commentary on our times perhaps, but primarily, I think, to enjoy and have fun with. Make of it what you will, it’s certainly worth letting yourself be carried away by for a while.

A continual distractor condition, what we

all live in: this blind probe head dispersive,

dripping with saliva, refusing to obey

Breadcrumb trail through the forest:

what a big universe you have, Grandmother!

across the watersheds of relevance