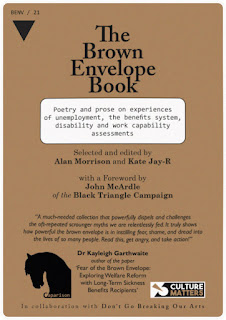 “The Brown Envelope Book – poetry and prose on experiences of unemployment, the benefits system, disability and work capability assessments”, Selected and edited by Alan Morrison and Kate Jay-R.    Published by Culture Matters.   315 pages £12.00

Alan Morrison is something of a powerhouse in the poetry world. His own collections, almost too numerous to mention, include the magnificent Captive Dragons and his role as editor (joint editor) with The Robin Hood Book, incorporates a wide range of poetry from a variety of names (some well-known, others not so) all actively opposed to government policy and the general misdirection of society. This current compilation has a similar thrust although as indicated its particular aim is benefits and disability and the ‘brown envelope’ is a very potent symbol of the issues around this subject. Here we have poets such as John Seed; Niall McDevitt; Jeremy Reed; S.J. Litherland; Martin Hayes; Naomi Foyle and Angela Topping plus a host of lesser-known writers each contributing poems which are testaments to, at best, the unfairness of a system which demeans and dehumanises citizens and turns them into claimants and ‘scroungers.’ The work of over a hundred poets is collected here and although there is a largely a lack of what I’d call experimental or exploratory work it would be to miss the point on this occasion. This is poetry as protest, rebellion, testament, analysis and sheer agonised pain and is accompanied by lengthy prose polemics, mainly be Morrison himself, as is his role on these occasions.

I’m not going to go into a lot of textual analysis here but I particularly liked poems by Jim Lawrence, Steph Pike, Mike Jenkins, Alan Morrison (‘Waiting for Giro’ – after Beckett), Sara Boyce, Finola Scott, Wendy Young, Elaine Edwards, Paul Tanner and Martin Hayes. There is humour here but usually of the dark variety. Overall this book represents a critique of the way things are organised and it’s a pretty heart-rending read at times. Poverty, illness, chronic overwork, lack of compassion, people trying to do their best in a situation guaranteed to beat them down and make the situation worse. Questions need to be asked and answers found. Lecture over. The poem that most represents for me the issues explored here come under a gathering by John Seed of quoted testaments from mainly 19th century newspapers which indicate perhaps how little progress has been made and how far matters have regressed since the implementation of ‘The Thatcher experiment’ in the 1980’s. Here’s the final example:

a charcoal burner living in the woods

ill with pneumonia sleeping out

in a loft over a penthouse

behind the Partridge Arms

died on the road to the Union workhouse

labourer on one farm nearly

to apply for relief from

the Board of Guardians

outside the workhouse door

If this all sounds a bit ‘worthy’ and unrelenting in its hammering home of the point I can only say that it’s sadly a point that still needs to be made. Poetry can do many things and protest and opposition are among those. Hopefully there may come a time when things are different even though it may be difficult to see a positive way forward just now.