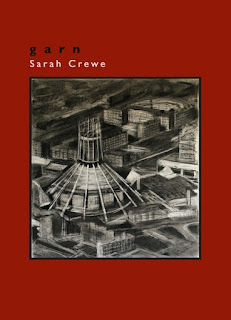 The first thing I love about this book is the title. It sounds like a place; it sounds a bit like a dialect version of ‘gone’ or ‘go on’ or, as Sarah Crewe glosses it in the first poem, hatchling, ‘gerrah’ of it’, ‘get out of it.’ It’s defiant, a declaration of intent, and a statement of class consciousness all at the same time.

Many of the poems reimagine the life of Eliza Doolittle, the working-class flower-seller of Pygmalion as a 21st century commuter between Liverpool and London, and makes a fierce defence of the language of the working class. This is not a woman who wants to imitate the middle-class voice of Middle England, this is a woman who speaks for herself, who brings to the surface those forgotten stories of disaster and humiliation class causes throughout the centuries.

In Souhwark Bridge: Marchioness, the connection between London and Liverpool is made clear in the first line:

Two disasters, one resulting in 71 deaths, the other in 96, are connected: ordinary peoples’ lives forgotten and demonised by the press. These poems are both objective and highly emotional at the same time; anger at the establishment’s contempt is held in suspension through a pared-down language that doesn’t raise its voice.

Her focus is always on the lives and thoughts of working-class women and the way their voices are excluded by middle-class men; but she also brings in influences from post-punk to the surrealist blues of Captain Beefheart as well as Bill Griffiths and Geraldine Monk. In The Spotlight Kid, she seems to combine all these influences and come out with some thing wholly original:

This collection also has an element of memorial about it: a sequence about Grenfell Tower, references to the Liverpool Blitz, the sinking of the Princess Alice, the aforementioned Marchioness disaster and the bombing of Blackstock Gardens in Liverpool’s Vauxhall area. All disasters where working people died. From social housing to the lives of working women like Eliza Doolittle, this book is intimately concerned with the lives of the forgotten. It brings agency and voice to the ordinariness of life, without being in any way ordinary.

There’s a breadth and a depth to this collection that I don’t come across in very many collections. A poem like Blackstock can veer from the Beatles to the naming of streets after slavers in a few lines:

compassion fatigue     a phrase hijacked    is this too much?

if the idea of suffering is boring     try

when the penny in land was overdubbed as racist

It’s great to see a book that does more than describe working class experience in grimly realist language. There is an exuberance in the language, and a celebration of the working class mind that is at times beautiful, though sometimes it remembers difficult and painful histories. I fell in love with this collection from the first line on.