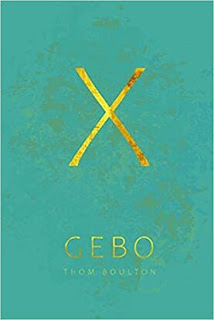 I liked Thom Boulton’s debut collection (Prima Materia, Waterhare Books, 2018) but I like his second, GEBO, even better. The runic title, suggesting the esoteric and implying the notion of ‘a gift’ among other things, sets the scene for a series of texts or poems which embrace mythologies and biblical references together with more modern contexts which are fused to create an ongoing sense of philosophical questionings and up-endings. These poems are seriously playful and have a wonderful musical aspect which represents I think a big part of their meaning. I’m thinking of the beats, of Ginsberg and even of some of the song lyrics from early Mark Bolan songs. The underlying themes are to do with ecology and the dark times we are living through and with possible artistic responses to this. It’s no accident that the opening poem is rather grandly titled ‘Apocalypse’ and I love the way this dramatic entrance also has a ludic quality which includes wordplay and deconstruction amidst the dark imaginings:

a meeting is scheduled

in the living rooms

of each depredated domicile

will dictate the insemination of The Saviour

or the dragon that fell from a city in the clouds

And then more silence

There’s an improvisational aspect to this poetry which suggests a forward movement based on word association and ‘going with the flow’ which cuts across the ideas or themes and which I find very appealing. Take this extract from ‘Occultists and Poets’, for example:

they challenge Poe, speaking out

An omelette is offered during the ritual

served on a two-dimensional plate

straight from the mind of Mrs Humpty Dumpty

does she cluck or does she suck?

too busy going solo with molly

hitting the electric boogie train at the 24hour disco dive

for all OCCULTISTS and POETS.

‘Butterfly’ has a quieter, more meditative feel and after the opening drama of – ‘the flutter of a brown argus / invokes rapid palpitations’ – we get ‘a breeze pauses to draw breath / dew descends down the stem / this moment cannot be kept / but leaves an impression in the soul.’ If the use of the word ‘soul’ troubles me slightly because of its previous overuse and its religious connotations I can only say that it works in this context in the sense of the immediacy of the captured moment and its aftermath.

‘On a Dead Man Buried at Crossroads’ would seem to be a hint towards Robert Johnson and the opening lines of the poem ‘There is a revolution but the angry teeth / don’t know what they’re biting’ follows through this musical suggestion with its skewed reference to Living in the Past (Jethro Tull). There are probably more submerged hintings which I’m not picking up on but I love the idea of their probable existence which adds to the overall playfulness of these poems and provides a useful counterpoint to the otherwise dark materials.

In ‘We Ate the Stars and Spat Out Their Dust’ we have a mishmash of cosmic disharmony hinting at filmic s/f tropes combined with wordplay and ‘sword and sorcery’ themes which suggest mythic/epic notions delivered via comic book imagery. The mix of visual stimulus, long a reality in modern culture and ever more ubiquitous, allied to serious reading, points towards the multi-scape available to a generation of younger poets who are redefining the tradition. It will certainly be interesting to see how poets such as Boulton develop in the future:

nobody knows where the body is buried

somewhere between the never-ending woods

and the rivers of aeon

its bawling will sink harts

faint tremors as the crowns clash

not the empty shells or maimed mannequins you spy

but the fight, the passion

We ate the stars and spat out their dust

we claimed its name and rode the waves

I could get really dark here and suggest that the contemporary threats to our world via global warming, our despoliation of nature and the virus which is going to be an ongoing issue – all connected matters of course – is not something that can easily be articulated via humour, even of the dark variety but it remains a fact that popular culture in the west has both articulated and avoided such hard facts through its various mediums. Poetry still remains marginal to popular culture I would say, though that may be changing, and hybrid forms are inevitably permeating the discourse.

There are many wonderful lines and sequences throughout this collection which both encapsulate an existing situation and point towards something better, as in – ‘where happiness is a borderless country in place of a flag,’ from ‘I saw your wish today’ – which I think is quite brilliant and also passages which combine lyricism with ritual and what I take to be a kind of sour comedy, as in the following:

the emerging atom, apple of my “Oh my!”

locked in a box and guarded by nine sisters

of an abbey built on snake skins

Oh, rotted corpse, you crawl towards the splintered ray

striking through the canopies of confusion, grown by these

A host of thoughts and images occur as I read these lines, from the ‘resurrection scenes’ of Stanley Spencer’s paintings to the conflicting philosophies of The Wicker Man (the film) and the textual playfulness to be found in modernist literature dealing with material which suggests the archaic and the oblique.

I could say a lot more about Thom Boulton’s relation to these issues in his poetry but I’d rather let the readers make up their own minds and simply hope that this short review gives a way in. There’s a lot to get to grips with here and much to enjoy amid the darkness. This is poetry which will give you pleasure as well as stimulate thought and is a collection I think you’ll want to read more than once. Yet again the publisher Andrew Martin has come up with a wonderful cover design, in this case incorporating a simple image with a striking green background.