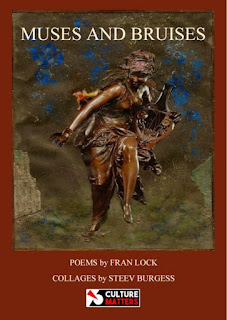 June Jordan said "Poetry is a political act because it involves telling the truth." Pablo Picasso said in regard to his painting "Guernica", “Painting is not made to decorate apartments. It's an offensive and defensive weapon against the enemy.” On the back cover of this book, Fran Lock says "If I have poetry, I have a voice, and that voice is a sword and a shield". It's in the context of these attitudes that Lock's poetry gets written, and the poetry can't be separated from the activism and the passionate beliefs she holds. Not many poets could get away with writing their own Introduction, then providing extensive didactic notes to each poem, but with Fran Lock it seems perfectly natural, as these texts provide a context and a manifesto through which the poetry is read. In her Introduction, she says

"...language belongs to all of us, in all its complexity and richness"

and while the poems which follow are certainly complex and rich, they are also reclaiming this type of poetic language for the working-class, the Romany, the marginalised people that Lock writes on behalf of - not writes for, because she is one of them. It's this reclamation of language which allows her to say, without seeming self-regarding, that "these poems revel in richness and strangeness, they positively wallow in it"; in other words, the homeless person or the night-shift worker in a distribution centre can own rich and strange language just as much as the denizens of the "middle-class enclaves" she describes in her introduction. In line with this ethos, the poems are meant to be performed, to be heard and understood, and this means that Lock's poetry, like that of Geraldine Monk, whom she admires, work both on  the page and in performance.

The poems are grouped into two sections, the first has a poem for each of the classical muses, who Lock updates to the contemporary world without losing any of their ancient strangeness. The second section is entitled "Rag Town Girls" and is a celebration of the lives of "'unacceptable', imperfect and angry women".

The poems to the muses have a driving, rhetorical force that savours the sound of words:

I am a bad wife; lank rage, grim schlock,
and stroppy poverty. I am sleazed in
the green of The Land, raining down
her birdsong blows.

You can almost hear this being read at a poetry slam. At the same time - and unlike a lot of slam poetry - these poems are complex and mysterious. I'll just take an example from the first section to illustrate these poems to the muses: in the poem "Melpomene" (the muse of tragedy) the speaker is presented, without context, as both a supernatural figure and a twenty-first century woman, and there's a male addressed in these poem, though we don't have an identity for him or an exact relation to the speaker:

The dubby crush
of my keening does his head in.
I sink kisses into screams like pushing
pennies into mud. And he says he is done.

The poetic technique of "keening" is what gives the female speaker power, and is a metaphor for empowerment through language (as Lock says in her introduction, "if I am articulate, then I cannot be discounted and I will not be ignored"). Referring to the word for Old Norse, the speaker says:

He cannot love me
in my words, raptures dragged from the slangy
wastes of Norn.

Again, reiterating the power of language, in this case, northern English dialect ('slang') which often has Norse derivations. The musicality, the poetic ear, the adept sense of rhythm make these lovely poems to read aloud, savouring the sound and weight of words.

There he is, eyes half closed, doing the math of a difficult miracle, wrist-
wearied, leaning on his swig, his pull of smoke. We assume he is God. He
reminds us of a man we once knew: slender and insulted by life, mixing his
blessings like strong drink, suicidally agile, tying a nimble noose the minute
your back is turned.

There is the obvious irony of this dubious character being God, and a critique of patriarchy, but the poem is more subtle and complex than that. God is very human, and the "girls" in the poem love him, care for him, but are aware of the power-relation:

He pulled you to him in a bouncer's embrace. Love as a grunting
headlock you cannot wriggle out of.

The poem comments on how young girls are raised to idolise certain types of men:

We assume his is God. Who else could he be? His blue eyes
Like stains under a black light, a half smile through a vaporous reverie."

The rest of the poems in this section celebrate the energy and survival skills of the rag town girls while pointing up the dangers and difficulties they have to face from "Dads that hassle us in shorts" among others.

The zest for language in these poems and the immediacy of their delivery is always in the service of the manifesto set out in the introduction. But the poems are not at all formulaic - the poet is too much in love with language for that - and the underlying belief and sense of injustice grounds the poetry and gives it a toughness and sense of purpose.

When a poet knows what her poetry is for, that it has a mission, which is (among other things) to reclaim poetic idiom for those previously denied it and to celebrate the lives of people at the margins who don't normally have access to it, then content and subject matter come naturally. Consequently, Fran Lock is a prolific poet; as well as her collections "Dogtooth" and "Contains Mild Peril", the book currently under review has a series of sister volumes, including "Raptures and Captures" and "Ruses and Fuses". It seems to me there is no lapse in quality in all this work, and I'd recommend it to any reader of contemporary poetry.