Review - "My Father" by Eduardo Moga, translated by Terence Dooley 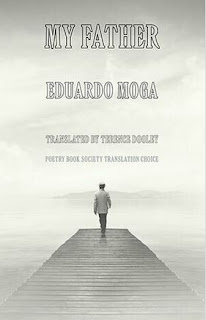 In this sequence of memories, some no more than a single sentence, Eduardo Moga recalls a father who died thirty years ago. It’s a collection which avoids any simple chronology, the poet’s anecdotes and reflections delivered as though in the order in which they occur to him, until memory is exhausted.

Various conflicting threads run through a text which doesn’t seek to mask its contradictions. Moga Senior was a declared atheist, yet married in church and sent his son to a Catholic school. He was a Catalan nationalist, but spoke a Catalan ‘full of mistakes’. He ‘hated Franco’, but would not join his cousins in seeking to recover family property seized by the Francoists in the civil war. Paradox is at the heart of this portrait of a father–son relationship marked by complex sentiments.

The father’s education ended in primary school because of the war, but he had a talent for drawing, listened to classical music and jazz, and read a great deal. He comes across as harbouring an exaggerated sense of himself. ‘My father considered himself an intellectual,’ Moga writes. ‘Sometimes he said so when chomping on a slice of chorizo or a rasher of bacon with his mouth open.’

But instances of petty vanity are counterbalanced by positive recollections:

My father and I used to read poems aloud from The Thousand Best Poems in Spanish, in an edition which had lost its cover and my father had wrapped in oil-stained newsprint. We laughed till we cried at The Banquet by Baltasar de Alcázar and How Times Change by Vital Aza. We also liked Despair, attributed to Espronceda.

Several sections mention beatings, one so hard the poet’s head banged against a wall. Other passages recall moments of affection, for example the father stroking his son’s hair while they lay watching television.

The sense of ambiguity about the relationship is established at the start of the book by four epigraphs. One of these, from Jesús Aguado’s Letter to my father, reads:

Once I was lost in a wood. Instead of searching for me, my father lay down under a tree. I found my way out by his snores.

Through the artful juxtaposition of different perspectives we come to understand Moga’s complex feelings, a mix of fondness, exasperation and aversion, never openly stated, only implied. He tells us:

My father didn’t come to the hospital with me when I had an operation on my foreskin; nor did he see me off at the station when I left for military service; he didn’t buy me a wedding present either.

More poignant still is the reflection:

My father never told me he loved me. Just once he declared, if anything happened to me he’d lose his reason. But it was a clichéd and overdramatic statement: what anyone with children would feel it their duty to say.

Any approbation he receives is for actions on which he places little value. His father is proud when Moga starts earning and contributing to the household budget, and he enjoys being taken places in his son’s car.

The relationship between Moga’s father and mother seems equally constrained. He recalls his mother declaring that if she outlives her husband she won’t marry again. He doesn’t remember them celebrating their silver wedding anniversary. Later in the book he says:

I never knew, or even suspected, that my parents made love. But, when she was fifty, my mother confided in me she was afraid she was pregnant. It was just the menopause, but I found out how wrong I was.

Moga avoids conveying any sense of superiority through his documenting of shared connections, and he hints at shortcomings in his own life. His own son liked to play with the poet’s feet, just as Moga once played with his own father’s. He remembers his parents talking to each other in bed at night, as he did with his own wife, ‘once’.

My Father is subtle and complex, more so than perhaps first appears, the simplicity of its language and reminiscences deceptive. It rewards repeated reading.

(Terence Dooley has also translated a selection of Moga’s work from the period 1994 to 2017, published by Shearsman as Selected Poems.)