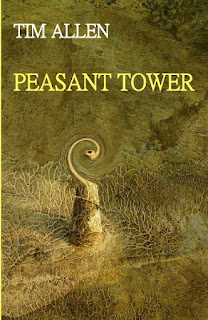 "Peasant Tower" is the new collection from Tim Allen, written in couplets, six to a page with the exception of the final page which has five. There may or may not be a link to Raymond Queneau’s "Exercises in Style", as referenced in the brief end notes but there is certainly a hinting towards a series of parallel narratives via repeated imagery and ‘themes.’ The back cover blurb which extracts from the text name-checks Marx and Freud and there’s a ‘quotation’ from Andre Breton which made me smile – ‘My friends and I enjoyed Peasant Tower very much and so did my enemies.’

The thing I most enjoy about Tim Allen’s poetry – in abundance here – is the unexpectedness of the images and the condensed nature of the lines which force you to look at things anew. It’s the kind of book that you might want to take to the proverbial desert island because you’d never get bored. So many of these lines, puzzling, often hilarious, weird, conjure up further thoughts and tangents in the reader’s own mind which can provide a source of endless creativity. There are references to popular culture – Robin Trower, Gilbert and George, Morecambe and Wise, for example – and an abundance of wordplay together with an underlying political edge which comes from the twin projects of anarchism and surrealism. There’s a playful interrogation of language going on here which can both cause you to laugh out loud and furrow your brow in frustrated incomprehension:

the unconscious never tires it is a lumbering atrocity

small town by the sea on a dialysis machine

traffic lights blinking through the trees

someone says it’s like a palace on this bus

I like reading these poems to myself and even occasionally aloud to get their measure and I can recall an occasion some years ago when Tim Allen read the whole of his long poem The Voice Thrower at one of Philip Kuhn’s Sunday afternoon soirees, no mean feat given the excessive wordplay and repetition of the piece. If there is such a thing as an a contemporary British avant-garde then Tim Allen is up there with the likes of J.H. Prynne, Peter Dent, Jeremy Over, Maggie O’Sullivan, Ian Seed, Geraldine Monk, Tom Jenks, Tony Lopez, Robert Sheppard and Kelvin Corcoran to name a few.

could see the bridge on the map but not in reality

lifespan of don nods off in depot

more unfair at the back than the front she heckles

hurry-the emperor is arguing with the king

The mix of fun and serious in Allen’s poetry, intermingled as they are, takes a swipe at the po-faced ‘superiority’ of the establishment, whether mainstream domination or remote avant-garde and hopefully gives heart to a younger generation of poets looking for something good to read and as a stimulation to their own work. His poetry isn’t going to be to everyone’s taste but the fact that it’s ‘out there’ and available is a sign that something interesting is going on.

The cover artwork by long-term collaborator Terry Hackman is a strange yet intriguing piece which utilises textures based on the work of contemporary French painter Jean Boccacino. Its central image – the tower, presumably – is an oddly organic beast which has resonance in terms of its possible evolutionary development yet also feels weirdly alien in a commonplace sort of way. The overall colour is a muddy green and the textures flit between what appear to be tendrils or branches of some kind, roots perhaps, and a simulation (?) of brush strokes which have the effect of impasto. The bottom left-hand side of the picture which has a sort of ‘golden aura’ is the most interesting in terms of texture and somehow suggests the unconscious, a dreamy ‘Richard Dadd’ kind of imagining. I’m not sure whether I like it or not but its strangeness is certainly analogous to the contents of the book and in that sense is entirely appropriate.