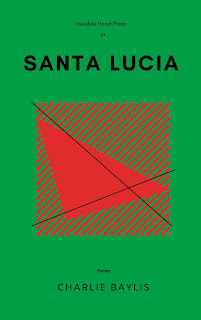 Sometimes these poems seem to be parody of surrealist writing and Ashbery-esque poetry. Take the poem which opens with the following lines:

the moon is the brightest pearl

in the night sky plucked for lovers

the moon as a pearl and a sky plucked for lovers sound like either cliche or a joke. But the poem continues to pile up metaphors which become increasingly strange, till we get:

the curls of your blonde hair

the corpse of Charles Baudeliare

with the glowing eyes of Greta Garbo

the hydrogen bomb catches us unaware

By now the metaphors are so extravagant that they have taken on a life of their own; the poet has allowed the language to take over and the opening lines are seen as a parodic starting-point leading to interesting places in the domain of words. The collection is divided into 'day' and 'night', although the differences in tone between the two sections are barely discernible. The collection as a whole contains poems which appear fey and whimsical, but which often lead to an emotional intensity. The short poems work well, often starting with what seems like straightforward statement or observation ("summer rain lashes santa lucia", "an apartment with a view of the city") before quickly moving into stranger territory. The need for focus in a short poem makes for more hard-edged imagery with less room for flights of fancy. Take this poem, complete:

an apartment with a view of the city

the dark streets of winter

distant waves and their secret powers

This poem moves a long way in a short space. After plain description of the first two lines the sudden switch to the dramatic "death performing savage miracles" is very effective, leading nicely into the distant waves of the following line. But it's the finely judged last line that clinches it; it's one of those lines, with its repetition of "& over" which is impossible to explain but which reaches that place beyond words that poems often seem to be striving for.

There is a poem dedicated to Sean Bonney and an epigraph to another from Sophie Robinson, and the influence of both these writers can be seen, especially Robinson's New York-inspired surrealism. The poem 'madonna', with the Robinson epigraph is an effective imitation of the style of her long poem "Art in America". The poem 'cherry cola', dedicated to Bonney doesn't much sound like him, but clearly shares his political drive:

culture as holy fools and the lines they control

culture as fuck the police

The heterosexual love-poem is generally considered problematic in contemporary poetry. In this collection (which is 'for Julia') there are some that subvert the form by their whimsy, by being almost-parody and by skirting round the subject. The poem "the poem on the edge of santa lucia" puts expressions of romantic love into italics, as a quote from the narrator's novel, leaving the rest of the poem to play with and make fun of romantic imagery:

i meet her on the pier where the orcas leap

over our heads in beautiful conspiracies

The same technique is used in a poem for a friend ill in hospital, with straightforward statements of support in italics and the rest of the poem seemingly there to please and entertain the friend with flights of linguistic fancy. This poem, like the rest of the collection, strikes a balance between lightweight whimsy and surreal imagery that effectively conveys emotion, with the balance coming down on the latter most of the time. Overall, it’s an appealing collection by a poet who has a clear conception of where he wants his poetry to go and a willingness to let the language lead it there.