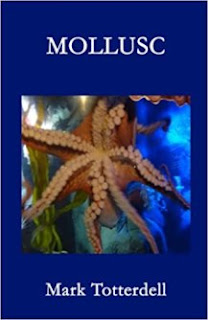 Mark Totterdell’s third collection continues his exploration of the natural world and our place in it with a substantial tome split into four sections, namely Insects; Birds; This and Molluscs. His poetry combines an interest in language in terms of etymology, sound, visualisation and taxonomy with a probing intelligence which often comes at things from an unexpected angle. He has a strong grasp of form and there is great variety in this book which combined with a playful element and a philosophical outlook makes it a great read. These are not ‘difficult poems’ but they provoke thought and hopefully also stretch your imagination and incidentally increase your vocabulary.

In ‘Geotrupes’ (Dung Beetle) we get the following:

It comes in at an angle, then it hits

slow bullet through flesh. It plunges its dark self

‘Chorthippus’ is more playful and I can’t wait to hear him read this one aloud:

Like his compatriot Alasdair Paterson, Totterdell uses the unfamiliar as a starting point for a degree of poetic experimentation and while I, in my madder moments, might wish him to take off into the realms of ‘outer space’ there’s no denying the effectiveness of poems such as the above.

In ‘Eyed Hawk Moth’ we have both a meditation on mortality and on the nature of evolution in a poem which combines human longing with a naturalist’s descriptive powers and analysis:

a frail perfection of loose-fixed scales,

a triumph of undesign.

Hopeful beyond reason I rest it

the faintest quiver in its wings,

It’s only a trick of the wind,

and even the trick’s a fiction.

The day the sky grew dull as lead,

as the old year was set to die,

a message that got no reply,

Although there’s an awareness of ‘the pathetic fallacy’ in this poem the description of the bird’s song is one of celebration, if tinged with melancholy, but the sheer beauty of the ‘unresolved melody’ echoes the final stanza of the poem, which in this instance has a more ambivalent feeling:

the only bird of Devonshire.

There’s an awareness of literary history which allied to the poem’s subject matter, feels very satisfying and Totterdell is a master of this kind of poem as he always brings something fresh to the project.

In ‘The Ravens in the Library’ we have something much more gothic in approach which combines the playful – ‘First they put on a fine black arrow display’ – with a sophisticated sense of purpose: ‘As if this is a fable. / As if there’s more to be read into it.’ If this hints at Poe then I can also sense Terry Pratchett in the background and the final stanza is a real cracker:

Their acids did their work, and in an hour

the tacky carpet tiles were constellated

with stinks of their soft, papier-mache shit.

This may be a poem generated during ‘Lockdown’, I’m unsure, where human civilisation and its values are challenged and nature is ‘getting its own back’ but it’s an unusually ‘fictional’ poem from Totterdell in the sense of its ‘up-front’ upending of the genres. It’s slightly unhinged and very entertaining.

The third section, This, has a wider brief and includes a more macrocosmic view of things, as contrasted with his focus on detail and the minutia of the natural world:

How bright we are

to see the fixed stars and the falling star

and grasp their simple size and distance ratio,

that one’s a local speck,

is a whole multi-billion star galaxy,

than all besides that we,

with our faint eyes,

Here we have the usual sense of wonder at the vastness of the universe, or what we know of it, an appreciation of the build-up of knowledge that has allowed us to speculate and at the same time a shifting of perspective from the very close-up and immediate to the far away and incomprehensible in terms of distance and scale. The gap between what we know and what we see is explored in a poem which attempts to take on ‘the big picture.’ There’s a need to interpret and to describe and an awareness of our place in this vastness (time and space) which is genuinely awe-inspiring.

By contrast, Spawn deals with human pride as the protagonist having accidentally trodden on ‘a squashy mass of raw sprogs’ (frogspawn) which has landed in the wrong place attempts to make amends. The final four lines echoes a theme which recurs throughout this collection, hubris and the negative impact the human animal is having on the environment. There is recognition here and contrition but perhaps also a deep sense of loss even as enacted in this apparently minor event:

‘My skin slime-blessed, I felt smug, / at my small life-gift, and forgot / my part in the draining of the swamp, / the harrowing of earth, non-stop.’

Totterdell’s poetry is filled with skilful word-play and delightful imagery which makes it so pleasurable to read as well as being stimulating to thought. In the final section Mollusc we have a lot about snails and slugs, from the beautiful evocations in ‘Snails’ where we get – ‘One, lemon yellow, has free-climbed the apple tree. / Another, with a swirl of dark chocolate, / has reached the peak of the highest beanpole.’ –  to the more visceral end of the business with this from ‘Slugs’: ‘they feed on what’s already rotted soft, / or on the foulest leavings of the dogs, / or on the innards of their gut-burst brothers.’ Totterdell is a master of shifting perspective and combining admiration with disgust and there is a more Swiftian, somewhat scatological element to the poems in this new collection which doesn’t in any way undermine his underlying philosophical approach as encapsulated in the following:

The snail has drawn its trail, unthinkingly,

across stone traces of its long-lost kin.

That reach of ours, to dive the depths of time,

to grasp the breadths, life as a billion riddles

for us to solve;

the best of what we are, the naming, knowing,

while in the warming oceans, all the shells

This has something of Shelley’s Ozymandias about it, in terms of its sense of ‘human over-reach’ and grandiosity but it’s a more ambivalent, measured poem (and I love Shelley) which mixes wonder with sadness and the hint of time running out.

The last two poems focus on the octopus and on the strangeness of this short-lived yet fascinating and intelligent creature, a distant ancestor which took a different evolutionary path a long time ago. From ‘Aliens’ we get the following:

Their limbs are oddly few, quite suckerless.

Their sexual parts are where their mouths should be.

We cannot know what it is like to be one.

means, though they’re bright, they can be safely caged

where gaps are even bigger than their heads.

If there’s an element of H.P. Lovecraft in some of Totterdell’s descriptions here it’s mixed with a sense of awe and something like admiration of ‘the other.’

The final poem is perhaps an elegy and a warning and also suggests to me another literary reference, that of William Golding’s The Inheritors, where there is tragedy and a deep sadness within an inevitable inability to communicate. Perhaps Totterdell’s poem offers a slight hope in evolutionary terms but it’s a poem which in its mix of simplicity and complexity and its combination of thought and feeling is very moving and provides an appropriate ending to a fantastic collection of poems:

and stand beneath the gases of the sky

as winners of the longest, toughest race,

wise presidents of everything we spy,

while on some seamount in the nurdled sea,

the highest, wisest of our bonefree kin

is watching out with fine convergent eye

and flashing warnings on its fast-change skin.