Review - "She May Be Radon" by Fiona Cameron 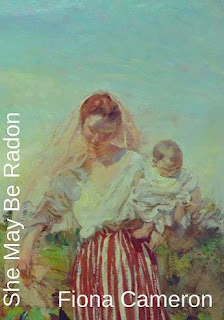 I like Fiona Cameron’s poetry. As far as I’m aware this is her second collection and features reflections on climate change and the aftermath of Brexit via a kind of diary entry notation often expressed through open-field layouts which highlight a playful aspect as well as having a strong sense of lyricism. There’s a lot going on here in terms of commentary and a sort of laid-back-thinking-aloud which belies the skilful formal elements and includes a plethora of wonderful phrases. The fact that this is a serious project – in terms of its political/ecological matter – doesn’t prevent it from being a poetry which also has an aesthetic angle which makes it pleasurable to read.

a foot strikes desperate at

got ahead of yourself again

It’s possible to construct a narrative around this short poem which is hinted at by the title but there is plenty of room for tangential thinking (appropriately so) which gives the reader room to breathe.

In ‘Tablet 9’ we get ‘information is buzzing, swarming. the air is constantly dragged down. the world turns quite funny right now. fractured. cracked open.’ Which might well reflect the sort of claustrophobic, anxiety-ridden atmosphere which has been our collective lot for the past year and a half, to say nothing of the mounting turmoil which preceded this time. The geographical location of these texts would seem to be that of Wales and the opening poem ‘Green Tomato Chutney’ (after Gillian Clarke) introduces a domestic setting which is also related to the land and our use/misuse of it in a poem which suggests living in harmony: ‘only tomatoes / bending stretching stinking sweet / no intervention required / September offers a window to salvage stubborn fruit.’

If there’s a ‘settled domesticity’ in this writing it’s one that is consistently under threat by the implications of a worldview which sees the dominance of the human species in terms of  war, conflict, economic advantage and overproduction. That these factors are having a global effect on the world population and on the natural world is made clear by the title of one of the poems: ‘I have a massive, unshakeable feeling that our way of life will come to an end in my lifetime. It’s unsustainable. I keep it to myself.’ If this is polemic then it’s very much in tune with the times we are living in and the underlying suggestions of apocalypse are always measured in terms of the future (women and children are central to these texts) and of questions around our stewardship of the planet. The images are often skewed, as in ‘Freedom of Movement’ and humour is used almost as a weapon in response to the darkness of events.

Not all of this poetry is immediately accessible, as is often the case with what I’m going to call ‘good writing’ but as the reader attunes to the textures and spaces within these poems you come to appreciate what often feels like compression and an oblique mixing of subjects which has a strong aesthetic pull as well as having something to say. These are poems to be dipped into, go with the flow and enjoy the phrasing, the sounds and the mingling of message and celebration.