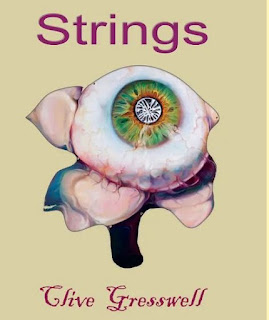 Clive Gresswell cites Samuel Beckett, RD Laing, Freud, Jung and the poets Sean Bonney and Tom Raworth in his introduction to his new collection of prose poems, an interesting development in itself. You can certainly see the influences and the overall title – Strings – may well hint directly towards Laing’s Knots, a book which deals with the difficulties of communication in relationships. The somewhat gory cover image (eyeball with attachments by Sophie Gresswell) may also hint at an eye injury incurred by the author (?) as there is a suggestion of this later in the text which has a very autobiographical feel, insofar as it’s dealing with disconnected fragments of thinking uncensored by the rational mind. If we are in uncharted territory here the writing has a very full on ‘performance feel’ (the author suggests reading them aloud ‘fast and furiously’ as an assault on the senses) which brings the disconnections together and is full of resonance, of half-remembered phrases (or so it seems) and mixes a lot of dark materials with a frenetic lyricism which embodies humour so bleak that it is at times a disturbing read. I often practice a quick read through with poetry in this vein before going through the pieces slowly and I think this tactic works well in this case. Take the following, one of the shorter pieces (page 15) though nothing here is longer than a page and the formal dictates are minimal:

pock-marked faces he had banished from the semi-circle the

the delicious misdoings the folly of dealing himself with other

people’s darkness. quite. and all caught out there in the swamp of

his being from where he came ra, ra. everything buried up in the

hilt. no breath. nothing circular.

You get the feeling of childhood trauma and of an ‘inner voice’ speaking those fragments, conversing with itself in the dead of night where often the dark stuff prevails and where thought follows on in apparently disconnected random ways, a struggle with control and at the same time an avoidance of ‘patrolling the unconscious.’ There is a certain playfulness here and the writing remains ‘accomplished’ despite perhaps the author’s best efforts to avoid this and let the material appear naked and  ‘itself,’ entirely authentic.

I’ve read this chapbook a couple of times before starting a review and I have to say that it feels quite different from Gresswell’s first two collections which were more organised and ‘recoverable’ in some way. I loved puzzling away at his work and finding a way in even though the communication was inevitably partial and as much to do with my interpretation as with the original text. Strings is a development and one which may have a lot to do with the prolonged period of ‘lockdown’ which we’ve all been experiencing during the past months. I have nothing definitive to say about these prose poems but they are worth engaging with and you may just discover a new writer whose work has something to say about where we (and I, the ‘I’ of these poems) are today.