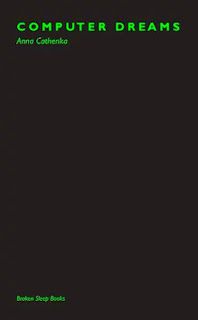 The opening poem in this chapbook, "Everybody's Autobiography", is subtitled "after Gertrude Stein". The poem is a monologue spoken by Stein, and the language imitates her hypnotic, repetitive phrasing:

this is everybody's talking
and everybody's walking and it is
lonely really lonely to. and so i went over
we all went over but
that is all there is to that.

These lines introduce one of the themes of this collection - "everybody's talking ... it is lonely". The poems refer to robots, AI, bots and general cyber-activity, but underlying this (or perhaps as a result of it) there is a sense of longing and loneliness. In the poem "Alone in a Body" the word "alone" is repeated many times while describing a rainy street, the aftermath of some kind of performance ("you were so alone / up there on stage tonight") and of being "alone in bed even though / there's someone else".

Despite the theme of loneliness , the poems are also funny, especially, "What Are You Doing", which details the interaction between a parent, a child and a bot. The text is lively and inventive, demonstrating that, even in our increasingly virtual existence, "Poetry can move / Your eyes a little, bring to mind / The object hiding in its metaphor". The linguistic register ranges from frenetic first-person monologue to something much more lyrical. There is a quiet and strangely touching poem about a robot sinking to the sea-floor and becoming "an octopus's hiding place" and on the facing page, there is the poem "On Reading the Ecological Thought in Norwich Cathedral Cloisters, 24 June 2018":

I read in the cloisters because of the auditory variance.
Sometimes nothing but the hum of the refectory extraction
fans, patience of spiders, monk ghosts, occasional pigeon.

This finely-judged poem (the word "refectory" is perfect here) continues to accumulate details of sounds heard until the speaker sees a peregrine falcon and there's a brief, understated moment of violence, implied, rather than explicit. This is followed by:

Uncanny with grandeur, organ in minor key. A rise into
exaltation. It is like the difference between being in a wave or
watching someone swim. The key turns major, bellows out an end.

The poem is a masterclass in how to write a sonnet, and the use of the form, including the turn at line eight is unobtrusive. The lines in italics work to both undercut the religious overtones, so that the poem doesn't become portentous, and at the same time introduce another form of spirituality symbolized by the sea.

By contrast, there's a poem called "During a Repairing a Drunk Mosquito Rushed into Field”, which is also the title of a YouTube video showing a microsopic view  of a mosquito (the link to the video is a subtitle). This poem mixes rhapsodic descriptions of the insect in question with expressions of distress ("how do i do happy / when my abuser/ was called Larry") and with physical and emotional longing. A comparison between this poem and the one set in Norwich Cathedral shows the range of which this poet is capable. Throughout the short collection, there is wit and exuberance allied to quiet lyricism which can be quite moving at times, as in this poem, given here in its entirety:

The simplicity and musical language, the skill with line breaks and the pathos resulting from  transferring emotions onto a machine are typical of the poems in this short chapbook. This is the first time I've read Cathenka's poetry, and I want to read more. I should add that it’s currently reduced from £6.50 to £4.50 on the Broken Sleep website, which seems a good deal.