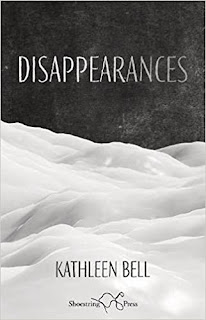 Kathleen Bell speaks in the voices of others; multiple voices, often from the past and often of people who have not been heard, particularly the poor and particularly women. For those of whom it’s true that, as one of her characters puts it:

...the song entered the world
without my name on it.

This book is divided into two sections, and the first section, which makes up the bulk, is entitled ""Balance Sheets for Mediaeval Spinsters". Many of the poems in this section are dramatic monologues and the speaker is often one of the mediaeval spinsters of the title. The poems create a convincing world, not so much historical as imaginative. There's no attempt to draw obvious parallels with the present (she leaves the reader to do that should they so wish), but the act of re-imagining these lost voices is a way of rescuing them for readers of today. The opening poem, "The Child" presents a series of consolations to a childless woman:

The child you never had
was not pressed for the war...
not prenticed to a bad master...
did not debauch himself into an early grave.

The numerous pitfalls and disasters of mediaeval life which the unborn child has escaped are enumerated, but there's also acknowledgement of the pain of childlessness and the longing. The final stanza merges these two strands:

You never lay awake by rushlight, yearned to know
that he was well, that all was well with him...

The shorter poems remind me of the Basil Bunting of The Book of Odes; spare and concentrated, with telling details and a quiet irony. Here's the whole of the poem "Longing":

Not all husbands are bad.
Beatings come rarely to a good wife.
There may be praise, too, and a loving touch
at the birth of a boy
or a fine pottage, hot from the hearth.

The poignancy of these words, those of an unmarried woman's apprehensions about marriage, are underlined by her hope that a "loving touch" should come to her, not for her own sake, but because she's successfully given birth (to a boy) or been a good cook.

In terms of poetics, these pieces are conservative, doing much the same as, say, Browning did in the nineteenth century. But Browning ventriloquised the privileged; artists, aristocrats, murderers, all male. By contrast, Bell is recovering the voices of those at the other end of the social scale. In this respect, these poems are doing something similar to those researchers who revived the folk song in the early twentieth century. The poems are reminiscent of the language and sensibility of folk music, having a narrative element and sometimes a repeated phrase, like a refrain, giving them a song-like quality. The poems also properly enter into the mediaeval world, not shying away from the central role of religion, and they include words spoken by an anchoress and a "Hymn To St. Ursula, To Be Sung On Her Day". There is also a political element. The poems are immersed, imaginatively, in the times they depict, so the politics is implied by the choice of subject. There are the voices of the poor, and of poor women, as mentioned. There is also, from the perspective of dispossessed peasantry, a powerful poem about Enclosure, which, given the vast scale of that injustice and its effect on subsequent history, is a subject that seems to be largely absent from the collective consciousness.

Later in this section, the poems turn to high culture, with references to Shakespeare and Dumas, and ekphrastic poems on Vermeer and Murillo and some pitch-perfect, formal sonnets. If these poems lack the immediacy of the earlier monologues, they still include some powerful pieces, including "Palais des Beaux Arts", an Auden-esque meditation on the everyday horrors depicted in the gallery, all the more powerful for its simplicity of language and the repeated words of the gallery attendant (echoing the police phrase), "move along please, there's nothing to see". Bell's strength is her ability to inhabit a historical character or epoch, giving a vividness to her portrayals; the characters, ranging from Gerard Manley Hopkins to the Roman historian Tacitus, are completely convincing. And then there's the poem "Malvolio in Prison"; which uses the first-person pronoun, but is less a dramatic monologue than a meditation on loss:

Her world was my order
and lightly set aside...

I am one with the earth
torn by the rich to clothe brief whims.

The poem remembers that Malvolio was a servant, and his stately lament is at one with the voices of the medieval spinsters of the earlier poems.

The second section of the book is "The Little Book of Illusions: scenes from a history of magic"; a sequence of poems concerned with the French magician Robert Houdin (1805-1871) who is regarded as the original stage magician. The poems include the dramatic monologues at which the poet excels, including a touching poem in the form of a letter from the magician's son, wounded in the war of 1870:

The poem blends the son's anguish with his memories of being his father's assistant:

You held me up and laid me on the air.
You took the poles away.

This sequence also encompasses politics of the time; the poem "Robert Houdin en Algérie" uses a description of a magic trick to comment ironically on French colonialism. Bell has the ability to get inside the mind and world of a character, despite their remoteness in terms time and culture, and she displays this ability throughout "The Little Book of Illusions".

Kathleen Bell has recently retired from a lifetime of academic work and university teaching; this is her first collection; the fact that it is so accomplished is testament to a life spent teaching others the art of writing and of immersion in a wide range of reading.