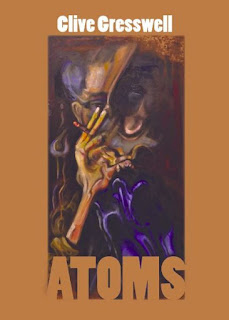 How to respond, in writing, to the multiple disasters that we are facing at the current time, that is a question. Clive Gresswell’s new chapbook does so in thirty odd pages of double-spaced text, with occasional paragraphs, by mixing it up a bit. There are repeated motifs and references, images which build, suggest and dissolve, while the title, Atoms, implies a structural stability of sorts which is nevertheless mysterious and hard to define. The answer here is to ‘go with the flow’ and Gresswell, a retired journalist who has a wonderfully creative way with words, combining precision with a sort of ‘tabloid crunchiness,’ hits the nail on the head both politically and aesthetically, insofar as it’s ever possible to do so. His dedication to the late Sean Bonney suggests a combination of the popular with the avant-garde and other poets he occasionally reminds me of for this reason are Barry MacSweeney and Tim Allen.

He combines mainly short sentences or extended phrases with the occasional longer line and the balance of the writing in terms of its sound makes for a smooth read even where you are being interrupted by contradiction, humour and resistance. There is plenty of anger here, never far below the surface but it’s tempered, if that’s a fair term, with comedy, wit and an overall elegance of expression which is simply spellbinding. There are many individual lines here which scream out at you – ‘A spinal / caucus of rebellion crashes full-pelt into the furnishings’. – for example (p12) but you are carried along with the flow of the piece which combines such a range of cultural, political and ecological references that extracting ‘the atoms’ from the whole becomes a pointless exercise.

Let’s take ‘an episode’ from pages 16-17 to give an overall flavour of Gresswell’s method:

future  facsimile  and  former  orange  groves  as   distilled  by Leonard

choice. The narrowing arteries blinked in corridors of power. Sparkling

gentrification  of London’s  East  End. Towards a more peaceful society.

cross. The  ritual  designated  in  waterfalls. An innate understanding  of

stagecraft.  A leaf  trembles on  the vine.  Bending beneath the powerful

rhetoric of Keir Starmer. His  body  invaded  by  atoms of no inclination.

The analysis here is brought about by a mix of caustic humour and bathos while there’s a building together of disparate thoughts, phrases and imagery which somehow establishes an entirety which

This is one of those collections which you’ll probably want to re-read in order to make connections, discover possible links and themes you may have missed first time around and in any case individual readers will create their own interpretations from the overall text. If ‘the brief’ of this writing is to devise a way of dealing with information overload then its success rate in terms of both entertainment and critique is high. You can admire Gresswell’s use of traditional technique and wordplay in this mashed-up form and enjoy the work on aesthetic grounds but its message, if I dare risk such a bold use, is stark and deliberate, however inchoate and fractured it seems at times.

The over artwork, again by Sophie Gresswell, appears to have been stylistically influenced by both El Greco and Francis Bacon and is probably a portrait of the author.