Review - “A Democracy of Poisons” by Tim Allen 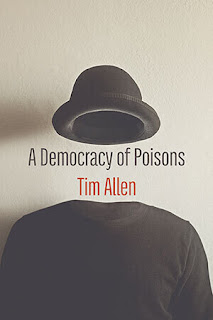 “A Democracy of Poisons” by Tim Allen, pub. Shearsman, 109pp

Tom Raworth once said, I think in an interview quoted by Ben Watson in Removed for Further Study (The Poetry of Tom Raworth) – ‘Basically I make things I like to look at, and I write things I like to read. There’s not much room outside that. Why would you want to be bored?’ This seems like a good introduction to Tim Allen’s voluminous output and this latest chapter in his ongoing literary project is a fine example of such a sentiment. This is a substantial book of what I’m going to call prose poems, each page housing one poem, each poem comprised of 28 lines split into four paragraphs. There are a hundred numbered poems and each poem has a one-word title. Within these ‘ritualised borders’ there is a wealth of material: autobiographical details merged with storytelling; political critique; angry soundings and an abundance of wordplay within sentences which take off at tangents yet circle around loosely targeted themes. Control and disorder are key organising tactics. There is plenty of humour amid the structured chaos. Take this opening paragraph from ‘71. The Sea’ by way of a random example:

You could take the ‘bare bones’ of this section as a starting point for your own narrative and much the same could be said of a lot of the writing in A Democracy of Poisons, a phrase I’m assuming relates partly to social media and partly to the awful mess we are in. It’s a prompt for further creativity as a response to looking into the abyss.

These texts appear to have been written following the near economic collapse in 2008 and the following fallout leading to Brexit and beyond. Flickers of memory appear alongside invented narratives and structural patterns (such as the above) in an apparent melange which you can either dip in and out of or process chronologically in your own time if you feel so inclined. There are copious allusions to Plymouth where Tim Allen lived for many years and also those relating to Portland where he grew up plus occasional references to London where he studied.  Speculation is juxtaposed with received information and there is always a querulous, questioning mode of approach which is fundamental to Allen’s way of coming at things.  In ‘11. Interested’ we get the following: ‘The Fall play it for laughs in the British Legion hut in Portland’. Did The Fall ever play in Portland and if so at a ‘British Legion hut’? Highly unlikely I’d have thought and by the time they might have Tim would have been long gone. Dream memories are a vital part of surrealist influence however and these imploding sentences are filled with information and stuff which may or may not be ‘true’. From ‘23. First’ we get – ‘Flotsam. First class flotsam. Jetsam. Second class jetsam. This Jet/Flot equality is no excuse. Excuse me, is this seat taken?’ The underlying anger is fused with humour and is expressed more openly in ’15. Saying,’ which goes like this: ‘Shut up Clive James. Shut up Stephen Fry. Shut your mouth Jonathan / Ross. Put a sock in it Chris Evans. My army is full of hatred for you all you / are all a bunch of gits’. There are endless ‘arresting sentences’ here which can momentarily take your breath away (fatal, otherwise!) and those where you attempt to apply logic before realising you are being led up a series of garden paths and decide to lie down and take a break. Tim Allen’s view on the world is as entertaining as it is singular and well worth engaging with.

In ‘95. True’ we are told that ‘flowery shirts certainly look good on some men’ and I couldn’t resist quoting the final paragraph which resonates in the mode of a vaguely misremembered dream!

but as we were only three we could barely make a circle. Norman knew

everything  so  that was  handy especially if  everything  came  up. Steve

correctly  in a relevant  interrogation  technique. Luckily we all knew the

answer when asked the team name: The Truth Brothers!

Tim Allen’s latest collection is probably as good as it gets, it’s in epic mode while whispering ‘counter epic’ under its breath. If you don’t like this one then his material certainly isn’t for you but if you’ve not encountered his work before you should give it a go. Fans will queuing up at the till, metaphorically speaking! The unattributed cover art is striking and is clearly influenced by Magritte, an artist Tim is very fond of.