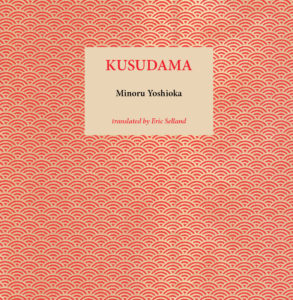 Minoru Yoshioka was a key figure in modernist Japanese poetry in the second half of the last century, and Kusudama is perhaps his most influential book. The word kusudama, as the translator Eric Selland explains in his Afterword, refers classically to a scented cloth pouch containing herbs and flowers, but also relates to the brightly painted papier-maché balls Minoru would have known as a child, hung up by shopkeepers in the crowded local markets to attract custom.

The texts of individual poems weave together personal memories, world myth, and literary references in a complex pot-pourri of imagery and allusion. Minoru draws not only on Japanese folk tales and legends, but also on Fraser’s The Golden Bough, the poet’s recollections of childhood embedded within a mythic universe. Many phrases in the text are identified as quotations from other sources, signalling the poem’s self-conscious intertextuality. Quoted material is variously indicated by quotation marks, parentheses or square brackets.

Cultural references extend also to the visual arts. The poem ‘Cuckoo’ is subtitled ‘At an exhibition of prints by Max Ernst’ and the text reads like a collage of images from the artist’s work. Ernst’s oneiric transformations of landscapes and figures, the metamorphosis of forms, and references to myth, might be viewed as a kind of visual equivalent of Minoru’s texts.

Minoru grew up in Tokyo’s Shitamachi district, which Selland describes in the notes as an area of ‘working class neighbourhoods and street stalls serving cheap food, directly adjacent to the theatres, burlesque shows, and brothels of Asakusa.’ The poet’s childhood is vividly evoked in the poetry. ‘Mother’ begins:

In summer’s parlor through which a breeze passes

grandfather lies on his death bed

like ‘an active volcano caught in a fly trap’

And sticks out his skinny bones

a horse fly whisks off to a tangled patch of weeds

And snails crawl over

the spot where the stone mortar of the house lies

Some of the poetry carries an erotic charge. In ‘Collection of Green Branches’ the poet pictures his mother as a mythical huntress chasing deer, and later imagines her ‘stripping off her soiled hunting clothes/a woman’s naked body’. In the preceding poem ‘Shadow Pictures’ he witnesses her ‘kimono loosened, falling over her shoulder’ as she mounts ‘not the aging father/but something that looks like the water god’. The final poem in the book, ‘A Crescent Wave Pattern’, describes a child seeing his mother throw ‘her legs up high’ as she changes seating position, revealing ‘(hair like a cloud/blood like the dew)’. The mother in this poem is described as ‘eternal’, as ‘demon and Bodhisattva’, and as ‘earth goddess’, combining the profane and the sacred.

Kusudama is rife with a sense of paradox, of the illusory nature of the world as we experience it, of the endless cycle of birth, death and reincarnation which is karma. The first poem ‘Roosters’ includes the line ‘(The women straddle an open grave and give difficult birth)’ – perhaps a reference to Beckett’s Waiting for Godot. ‘Form is shadow/and shadow form’, we’re told in ‘A spring Ode’, and ‘Mother’ includes the lines: ‘What is unreal/equals the real’.

Section 4 of ‘Nectar’, which draws heavily on Fraser, reads:

Given the possibility     my people

(give shape to things brought back

from the other shore)

(The world of the senses) is ruined

and there is (one world)

above the (water wheel)

(A wheel of gold) turns slowly

For Minoru the poet’s task is to separate him/herself from this world of illusion, to see the eternal in the particular and the particular as eternal.  ‘Become that lone, insistent (being)/called (poet)/ on the far side of the (maze)’ he commands himself in ‘A Crescent Wave Pattern’. At the end of ‘Wild Geese Descending’ Minoru writes:

not in remote mountains

not in secret rooms

nor in old books

but in a commonplace cat by the hearth)

As long as you are living

(give yourself to[mystery] and to [space-time])

Selland first translated this book in the 1980s when Minoro was still alive, and the poet gave him advice on the meaning and significance of various phrases. The present volume is a slightly revised version of the original translation (which was published in 1991). The translator has provided a helpful set of notes and an Afterword in this new edition, offering a fascinating glimpse into Minuro’s poetic world.