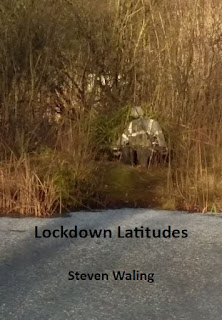 Steven Waling’s Lockdown Latitudes is a pamphlet featuring poems composed from the time just before Covid broke out, up to the launch of the vaccine. I’m not drawn to poetry about the pandemic, partly because I mistrust the ability of poets to say anything revelatory about such a big topic and partly because Covid features so prominently in the news cycle that I’ve lost interest, developed immunity, and am considering relocating to a kinder planet. I sincerely wouldn’t mind if I never heard the word Covid again. Fortunately, however, Steven Waling’s Lockdown Latitudes are sufficiently broad and nuanced to bring a deeper understanding of the subject. Furthermore Covid is not the only topic on show, but one of many points of interest in Waling’s poetic landscape.

The pamphlet opens with ‘In the bombed out church’ which talks about two sites of worship, St Mary del Quay in Liverpool and an unspecified St Luke’s, quite possibly in Manchester, ‘the most bombed outside of London’. Throughout the poem Waling shows off one of his favourite techniques, jaunty juxtapositions and cut-ups, so there are ‘whales & dolphins / singing’ alongside ‘famished Irish men loaded on boats’ and fragments of the Lord’s prayer. It is a successful opener, breezy and porous enough to breathe in, bringing in a light religious theme which echoes throughout the pamphlet like a feint Sunday morning church bell. The poem, like others in the pamphlet, reveals Waling to be something of a poet of place, his place being his native North-West of England.

‘Jesus strolls down Market Street’ is a prose-poem which develops the gentle religious theme, it is a tale of Jesus lost in the modern world, a shy man walking through Manchester city centre embarrassed by Jehovah's witnesses shouting at people, hiding his face in case they recognise him. Jesus buys fresh underwear in Primark (a questionable decision, has he considered the supply chain!) and then gets an old woman a coffee in Starbucks (is there not a local coffee shop, Jesus?!), after she is confused by the card machine. Later Jesus goes to sleep on a park bench, accompanied by the pigeons. This is a version of Jesus I can warm to, operating in direct contrast to the evangelical high street ‘Christians’ who chastise people for their sins and believe in only one answer, quite possibly the wrong answer. Waling’s Jesus is a man of simple and kind gestures, alienated by a world which is too far gone to be saved. ‘Jesus...’ is a well executed prose-poem, offering a subtle commentary on the failures of religion, while easy going and amusingly told.

The closing poem ‘Talking the vaccine blues’ is one of the more explicitly Covid focused poems. It opens ‘Have you had your first jab yet’ before shifting scenes to the murkier haunts of Manchester, ‘a drug flat in Moss Side’, where the natural analogy of injecting heroin and injecting Covid vaccine are interposed. It is a curious comparison, and one that works, the grimness of a drug den and a vaccination waiting room both radiate distinct shades of pain, interestingly meshed together until the poem ends with a sore arm, though whether through legal or illegal drugs, is left to the imagination. It is in quietly observed moments like this that Waling triumphs, capturing colourful contours of day to day life, thinking about places that exist in the moment, then moving on. Lockdown Latitudes is a good pamphlet, one which leaves me curious to read more of Waling’s writing.