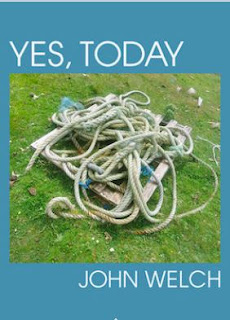 It strikes me that I haven’t read much of John Welch’s poetry despite being aware of his presence for some years and I really ought to remedy this as he’s an interesting writer. The opening poem ‘Its Characters’ I read through carefully before reading the ‘explanatory’ notes at the end which relate to an artwork on which the piece is based. No matter as my interpretation suggested the complexity of cloud structures and the relation between words and the world and the way in which an internal monologue can get so close to the heart of things. These are meditative poems which are also about movement and observation – Welch is always walking somewhere in an ‘out and about’ sort of way – and they are wonderful artefacts to be enjoyed, puzzled over and contemplated.

It’s the white book of the sky

I struggle to mention,

To know one thing from another

Being constantly taught the answer.

It was something left out in the rain.

This piece of it, it is like no other

It’s a beautifully balanced piece in terms of its structure which combines simplicity with complexity and can send a reader’s mind off at multiple tangents. The opening phrase – ‘It’s the white book of the sky’ is just perfect.

I get the feeling that these poems may have been written during the last year or two in which our sense of ‘reality’ has somewhat shifted. From the title poem we get the following passage:

To turn aside, ironist saunter

A bird’s caught in flight

And shot clean out of the air.

This is a poetry which reflects upon itself and however dramatic the imagery or suggestive the phrasing it all feels so perfectly ‘at ease’ in its environment. The thoughts that are going through the observer’s mind, allied to an accumulation of language and experience, are related to what’s going on in the ‘here and now’ (an ‘ironist saunter’) or so it would seem.

‘Breathing’ is an important aspect of Welch’s method, if we can call it that. ‘Inspiration, after all / It’s just a breathing in.’ (from ‘Extract from a Book of Breathings’). This ancient notion also relates to the act of walking and to the relation between such and the length of the individual line in a poem. Welch is very in tune with these ideas which comes through in the meditative nature of his writing. From the same poem we have the following:

Being given time to breathe

All’s in the throat, to gargle and sing

In too-close proximity to the language.

Slight as an inclination of the head

Over such an enormous landscape.

There are those who would still argue that such pondering on the nature of process is intrusive to the poetry itself but this working-out of complexity in the ‘doing of the thing’ seems perfectly natural to me and I should hope to anyone who has been knocking about for the past fifty years or more. Not that I’m trying to put off younger readers you understand. Reading Welch’s poetry reminds me of when I first encountered Helen MacDonald’s work (prior to her more popular writings) where the sense of exploration and of being confronted with an exciting challenge, were key motivations. As I said at the beginning, I’m going to have to read more of John Welch’s poetry. I hope this has whetted your appetite.