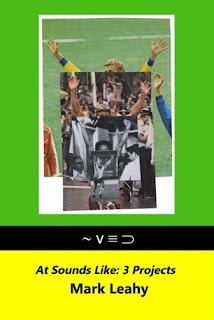 This new collection from Mark Leahy as the title suggests is in three sections, each with an introductory passage which gives a context to the processes involved. This is poetry which has a firm base in conceptual art yet the work produced has an element of entertainment and certainly of humour and shares common ground with the writing of let’s say Tom Jenks and Phil Terry (both published with if p then q) where the approach is experimental yet available to those with an open-mind to contemporary poetry. Leahy’s use of the homophone and of various technical procedures and indeed technical devices are not always immediately explicable but the end results are at best intriguing. I’m not always sure of the relation between ‘the project statement’ and the work itself but perhaps that’s not so important and it’s always useful to have some indication of how the material is engendered, especially with this kind of poetry. There is a relatively regular structure within each section, at least as related to nos. of stanza etc. I’m going to include a sample from each section which should give the potential reader an indication of what to expect.

Bolt-on  wrangler. Often, where  were they in the  night when

the movie started. To play on wells, later to talk, good luck on

the way with the same, same to me  beach party. Now we will

say thanks again; let her know everything, letter now, will they

The visual montage at the beginning of the text indicates sound and communication, hand gestures and the act of listening/receiving information/disinformation. Richard Nixon appears and there may be an image from the Nuremberg trials, I’m unsure.

From the second section ‘revised dictionary supplement’ we get the following:

I’ll mind my language around the old editor otherwise the

Title of heel of the year goes to you, even if you’re the

greenest entrant; it almost up and neat me and so much for

the “cine” effect you promised.

what that butterfly chasing dude with his hobbyhorse makes

of hankie holding as a clue!

Amend your proposal and the possibility of doubt slips away,

leaving a strong design ethic which appears more twisted if

is managed so automatically to form a glittering icicle.

I found this central section the most interesting to engage with, reading the poems through quickly and noting the gap between syntax and semantics. The mixing of vocabulary generates humour, puzzlement and a sense of overabundance. Some of the titles are astonishing.

‘Threaded Inserts, Drill Bushings and Locking Studs’, the final section, includes part of a ‘score’ for a performance at Plymouth Art weekender in 2017 and it’s worth being reminded of the performance aspect of this material.

Forget tales of eyes looking around

and ask if this is the moment that

forever moving to the right.

Extracts can only indicate so much and you need to read these pieces through a couple of times to get a proper feel for the work. This is sophisticated poetry and as I’ve suggested, particularly in its second section, is full of variety and interesting clashes which keep the pages turning. Its smooth meshing is at times quite delightful.