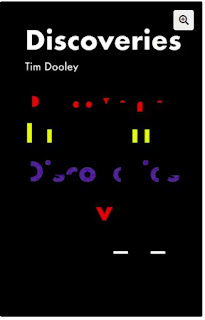 “Discoveries” by Tim Dooley, pub. Two Rivers Press. 64pp. £9.99
Narrative is the quintessential form in which reality presents itself to the human mind and the episodes in Tim Dooley’s Discoveries offer an unblinking gaze at both history and geography. His understanding of who we are in relation to who we were and of how our sense of the Now is determined by the corridors left open to us by pandemic makes this new volume from Two Rivers Press a patient and quiet companion to the approaching winter.

Concluding his talk on Dante to the Italian Institute in the summer of 1950 T.S. Eliot had suggested that reading the Italian poet became for him a constant reminder ‘of the obligation to explore, to find words for the inarticulate, to capture those feelings which people can hardly even feel, because they have no words for them.’ As if almost in response and stumbling towards an understanding of the effect of the London bombings of July 2005 Seamus Heaney wrote his sequence of sonnets District and Circle the second of which conjures up labyrinthine structures as depicted by Piranesi:

Posted, eyes front, along the dreamy ramparts
Of escalators ascending and descending
To a monotonous slight rocking in the works,
We were moved along, upstanding.

And some sixteen years further on a firm tone of resigned awareness registers the effects of the Covid pandemic in Tim Dooley’s ‘Circles’, one of the quietly reflective poems from this new collection:

In Dante’s long catalogue of souls,
some are judged, some pitied, some revered.
It’s hard to make such sharp distinctions
circling the supermarket aisles.

We keep our distance advisedly,
moving briskly among the half-filled shelves,
looking intently to our needs
while others look to theirs…

The sense of self-absorbed isolation in this picture opens up a convincing recognition of corridors of imprisonment. Whereas Eliot’s figures from Dante presented the reader with a crowd which crossed London Bridge as ‘each man fixed his eyes before his feet’, Dooley’s supermarket customers ‘look intently’ at what they need to buy from the shelves which are already half-empty. The isolation of each contained within the socially-distanced space separating one from the other is quietly felt with the word ‘intently’: the focus upon the needs of the one has no room for an awareness of the needs of the other.

On the back cover of Discoveries Katy Evans Bush directs us towards Dooley’s ability ‘to be trenchantly political’ within a ‘quiet’ and ‘contained register.’ This note directs us almost immediately to the twenty-three prose paragraphs which sit at the heart of this book. These discoveries, each a hundred-words long, revisit a source of shame which rests unresolved at the heart of our shared history: ‘Traffiques and Discoveries’.

‘History isn’t what happened. History is just what historians tell us.’ As if to echo those famous lines from Julian Barnes’s A History of the World in 10 1/2 Chapters in which he had stated the postmodern attitude towards history which has gone on to haunt both fiction and literary theory since the 1990s, Tim Dooley’s delving into Navigations, Voyages, Traffiques and Discoveries of the English Nation in Africa, the eleventh volume of the monumental work on travel and discovery written by Richard Hakluyt, opens with a caveat:

Polidore Virgill explains that Charles VI of France, at the

bidding of the Genoese, decided to ‘wage war against the Moors’,
a late Crusade aimed in part to combat piracy in the Mediterranean.
He continues ‘Likewise Richard the second, King of England, sent
Henry the Earl of Derby unto the same warfare’. Yet it was not
Henry Earl of Derby, the Bolingbroke we know from Shakespeare’s
history plays, who went on the expedition but his illegitimate
half-brother, John Beaufort Earl of Somerset. So this record of the
earliest English involvement with Africa provides an inaccurate
account of an ignoble venture.

Dooley highlights for us the ‘passages rich in vocabulary and rhetoric’ with which Hakluyt’s prose is decked and which bring to the present day the ‘discoveries of cold barbarity driven by profit.’ What commences with four hundred ‘and odde’ pounds in weight of twenty-two carat gold, accompanied by thirty-six butts of grain, and two hundred and fifty Elephant’s teeth (‘A sizeable graveyard’) becomes within a decade ‘an hundred slaves’. The clear directness of Dooley’s comment on that word ‘slaves’ offers us the sound of a voice we learn to trust throughout this collection of poems and prose:

That word uttered, the indifference to common humanity becomes
plain.

Dooley reads Hakluyt ‘in a microfilm copy from the University / of Alberta, online via archive.org.’ This is reading which takes place in a room, and I am beckoned to revisit an earlier poem in the volume.

It seems you’ve spent significant time
in this room, or one like it,
or in that state of mind where will
recedes and consciousness occupies
itself with calculations,
fragments of tune, anything to
avoid attending to what is present at the moment.

Within the walls of Covid containment the mind is haunted by fragments of tune and the ‘presence’ that ‘slides from each’ word. Within the circles of Tim Dooley’s poetry ‘Our phoned exchanges / orbit the mind as days expand’ and our heightened focus upon the Here and Now permits us to notice ‘daily changes beyond statistics’:

a different flower in that window,
blossoms now falling from the trees.

This is a poetry which comes to terms with a shared reality that we have come to recognise over the past four years. It is a poetry which offers a tone of care and compassion that moves into a space beyond simply the recognition of the strangeness of our times:

But with streets largely empty, traffic rare, and seabirds calling
as they range more widely searching for nourishment, there’s
something uncanny about the ease of these horned nibblers
rubbing their white coats against privet hedges.