Review - "Singing in the Dark Times" by Margaret Corvid 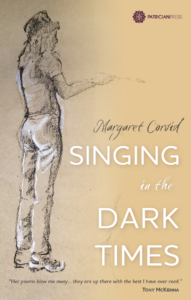 Margaret Corvid is a relative newcomer to the burgeoning poetry scene in Plymouth. As a journalist her work has been published (online) in The Guardian, New Statesman, Cosmopolitan and Narratively. Some of her poetry has appeared in the magazine Red Wedge. She is a terrific live reader of her poetry and is also a writer who manages to successfully write in traditional metre, rhythm and rhyme without it sounding or feeling overly awkward. The work ‘on the page’ may prove slightly trickier for someone with my sensibilities but I enjoyed reading these poems which combine a public outlook with a more ‘personalised politics’ and combines feminism with a wider perspective.

She is particularly keen on the sonnet form and it’s probably worth quoting a couple of these in full to give a flavour of the whole:

We cannot small our way into respect.

We cannot whisper, copying the voice

of women whom have never had a choice

and soft spoken, and gentle, indirect

ask for a shred of light, of life, of ease

open the window, gaze up at the moon

and wait for fairies, hours upon our knees.

We cannot cram ourselves into a box

and hear the package tape seal up our ears

load on the train, all trembling with our fear

and wait til someone opens up the locks

and wipes us clean, to sit on heaven’s shelf:

We’ll have to stitch our lives from life itself.

We learn that it’s not our fault that we’re afraid.

We learn our terrors burst from every breast

and nurse our wounds, pare rot with wicked blade.

The monsters walk the earth in human flesh,

and build machines, bureaucracy and war

to spare their ears from all the piercing screams,

to spare their hands from plunging in the gore.

We learn to watch, to spot the hidden seams,

We learn we’re raised for slaughter, that to win

is our dead faces, flayed off, stretched flat

and cured, and honoured, hung on castle walls,

mouths stuffed with praise: we never lived at all.

There’s a lot of vulnerability in these poems and the mix of political acuity with psychological insight is impressive and makes them more interestingly complex than they may at first glance appear. You can see the influence of Robert Frost here (unsurprising as Margaret Corvid is originally from America) but I also get hints from closer to home with such poets as Merryn Williams, Simon Curtis and even James Turner, the latter working with similar themes and also writing exacting sonnets, however disguised they might be.

There are a lot of suggestions of childhood trauma – ‘School’ and ‘Paper Dolls’ for example, which run through these poems almost as a subterranean theme, clear and direct on the surface but hinting again at darker undercurrents and the ‘political thrust’ of these poems seem to motivated by a sense of redress and justice. In ‘Our Revolution’ we have opening lines – ‘Let it have no leader, this campaign. / Let it be led by cool fresh water, clear and sweet’ – which again combine a personal psychology within a wider remit and surely points us towards the subject of climate change and the natural world with the closing – ‘…and, shivering, turned away from the abyss’. The opening poem ‘Sienna’ deals with covid in dramatic language which has all the power of a requiem (‘full-voiced, sung with a curse or blessing found / to all our fathers buried in the ground’.) while the following piece, simply entitled ‘Jo Cox’ has a first line – ‘Your neighbours are at war with you, you know.’ – which reappears at the end as a refrain and again mixes the ‘personal with the political’. In this instance the description works much more deeply than a political slogan would suggest.

Overall then, this isn’t the kind of contemporary poetry which really gets my juices flowing but it’s technically competent, skilful and in its own terms very successful. I’m pretty sure that Margaret Corvid will be publishing more work in the future as this is a highly accomplished debut.