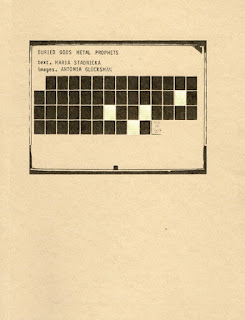 This is a beautifully produced book with superb page layout and illustrations from Antonia Glucksman. The subject matter relates to growing up in Romania in the post WW2 years and the subjects of the Cold War and the Ceausescu regime are never out of the picture. How much of this is directly autobiographical or family related is unsure but much of the text relates to the lives of children growing up in an orphanage and the mix of government statistics, bureaucratic pronouncements (propaganda) and diary notes from the viewpoint of the children is intriguing. There is satire relating to partial erasure of official jargon to suggest censorship (and self-censorship) and the ensuing complexity created by this mixing is quite something. There is also an obsession with chess. Stadnicka’s very European style of Surrealism feels very appropriate as a way of mediating absurdity, horror and confusion and I was reminded at various point of the similar strategy utilised in the film Pan’s Labyrinth where a gothic fairy tale dream world becomes an antidote to a harsh and brutal authoritarian reality. Politically, I feel the text is usefully complex because it doesn’t work in black and white cold war stereotypes but hints at partial understanding through the voices of young adults dealing with the day to day reality. Stadnicka’s poetry always has this complexity which isn’t easy to engage with all the time but it’s certainly rewarding and stimulating in a variety of ways if you persevere. There’s a chronology of related world events at the end of the book which helps to give you a way in if you’re unsure of the history. This is a short review and I’ll just give the reader a few selected extracts to give a flavour of the actual writing. I could say a lot more about this but feel the texts should work for themselves:

sins  to  confess  here, that’s  why it  takes him

agez  to get back to  hiz office, redfaced, tired.

So much to talk about that  sometimes  he haz

I wonders what Kasparov would fink about

this.  Remember Rules!  Castling is the best

though comin to fink of it, rules are already

decided  for  uz  and  comez   with   invisible

chainreactionz.  It aint  bothers me; I  pulled

my first toof out and dint hurt that much.

There’s humour here, of the dark variety and a mix of sophistication and innocence which is curiously moving.

The restless orphans call my name

and the bell ringing above my desk

is a wolf’s howl, lost in a snow storm.

strapped to their cots.

The moon holds them tight

and the walls narrow and stretch

upwards as the morphine vapours seep

through pillows. Fog settles on each cradle.

Outside the treatment room sleet is knee-deep.

The dorm is a tomb. God’s teeth

are falling over the courtyard.

The world shut its gates for the night.

Here we have a different perspective and I’m reminded (as often with Stadnicka’s writing) of paintings which conjure often jarring imagery and yet feel weirdly comforting at the same time.

“God’s teeth / are falling over the courtyard.’ is a fantastic speculation, mixing the oddly abstract and conflicting with the physical reality of the weather. I’m never quite sure where I am with her imagery and its darkness but this is writing which is hard to ignore and it’s well worth the effort to engage.