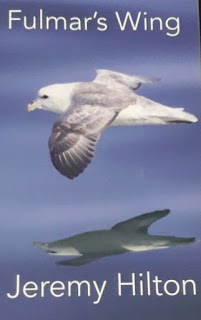 Jeremy Hilton is a poet, composer and bird enthusiast who has been publishing regularly since the 1960’s and who also edited the fine, bursting-with-content magazine Fire, from Kidlington for a number of years. This was a terrific achievement which had a wide remit and which combined a welcoming approach while also featuring writers of renown who already had a publishing record. It was a magazine that I feel very proud to have been published in when I was trying to ‘find my own voice.’

Fulmar’s Wing is arguably Hilton’s magnum opus, a long work which comprises 75 individual poems which each have a discrete existence while also being read as part of a bigger project, a series if you wish. It combines Hilton’s love of the natural world with his love of music and a restrained anger which rails against the despoilment of our environment via an eloquent form of lyricism which is so powerful and so good to read. It is part elegy, part ‘political documentary’ and is filled with fine writing which grabs the heart and the mind in equal measure. It’s the best long poem I’ve read in ages in fact, simply that.

this idyll of afternoon prescience

the long bass of ocean breaking to foam

and later rain patters the windows

cleaved meanders of water through

sliding shade, as the new rivers

carved across the Argentine pampas

when forests and grassland give way

to soil too loosed and impoverished

by soya by quick profit by greed –

with the emigrants through those hemlocks

through the thorny and inhospitable marsh

where the winding Pilcomayo floods

shallow as the tide over moonlit shingle

It’s the mix of documentary style reporting which combines a green/socialist outlook with a wonderfully lyrical style that makes this work so convincing and impressive. The bird’s eye view of things is well represented by the fulmar which has a wide distribution and the global aspect of the work, locating the reader firmly in our troubled times, where climate change and the excesses of capitalist despoliation and short-term profit motives are wreaking havoc, is well evoked.

This sequence of ‘irregular sonnets’ (a term Hilton borrowed from Chris Torrance) takes in a whole worldview, an attempt to say something important about where we are now in our relation to nature and the environment while also including along the way references to musicians/composers and artists who have related to these themes in their work. It’s at once an overview then, an impressive documentary while also achieving a sense of the immediate, of detail and of celebration.

Alaskan drift is fog of the wolf and

the filmy sky threads colour lines along the sundown shades

elders of the tribe narrating memory as myth

halt the wander with raw cry, before lament

nests of the longspur on tundra tussocks, grassy

erratics, the under-river of days that ponder

the retreat of the ice

Raw description and lyrical evocation is followed by thought-processing, all meshed in an ongoing narrative which is filled with fascinating materials, at once a pagan hymn of praise and a lament for what is being lost. There is no flashy wordplay here yet these texts are filled with wonderful writing, where technique, although not in the foreground, is very much in evidence. This is a writer producing at full volume, discoursing on history and geology at one moment then embracing the immediate, the now, in another. It’s a book which you’ll want to revisit for sure.

…from Honduras from El Salvador from

they move north through friendly Mexico

to a hostile border

early December and the fulmars are back

returned to their cliff-top shelves

on a fury-filled sea

the rock of the city cries

to still chaos by the fleet shore’s shingly mud

where the turnstone and dunlin prod

where washers at the ford pray

and an angel appeared to Juan Diego

church violas tuning out to darknesses

into fadeout over Andes, Orinoco.

In the end notes Hilton credits two key writing influences, those of poet Chris Torrance and activist/ecologist Barry Lopez (both no longer with us) and points to aspects of montage within the work which includes both writers. He also talks about his own location in Bridport where the fulmar is present alongside an array of wildlife set among new ‘landscapes, seascapes and skyscapes.’

The back cover recommendation from Peter Riley is an additional ‘selling point’ and Giles Goodland’s comment that ‘The act of birdwatching is for Hilton what fishing was for Hughes’ is equally persuasive. This is a cracking collection which anyone interested in contemporary poetry and in the state of the world really ought to get hold of. It’s a great read for birdwatchers as well and alongside Helen MacDonald’s writings/documentaries and Andrew Martin’s Shoals of Starlings is a must.