Review - “The Owner of the Sea” by Richard Price 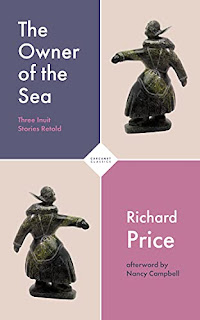 The Owner of the Sea is a ‘rewiring’ based around three Inuit stories which combine mythology with ecological issues and an anthropological perspective which relates to the harsh realities of surviving in an extreme climate. We have a new take on pantheism and these are also some of most weird and scatological pieces I have ever come across. Price makes it clear in his introduction that although he has taken a few liberties with the existing sources these are poems which still have something to say to us today in terms of our place in ‘the natural world’ and the strange symbiosis expressed throughout is at once entertaining and hopefully also thought-provoking. The structure of the poems is pretty straightforward, which is perhaps the best way to present material which involves such shape-shifting and at times shockingly dramatic moments or encounters. It is hard at times to know how to read these poems but as they certainly work on an entertainment level it’s probably best that I give a few examples to give the potential reader a sense of where Price is coming from.

The Owner of the Sea

Who remembers the names of the Owner of the Sea?

She is the Owner of the Sea,

The Woman Who Would Not Marry.

The One Who Did Not Want A Husband,

The Owner Of The Sea.

She Is The Woman Who Was Always Having Sex,

The Woman Who Was Always Marrying, Always Divorcing.

She is the Owner of The Sea.

Say simply the one down there.

She is the Owner of The Sea.

Is it right for a woman to sew the hide of a caribou,

but wrong to spear one?

Is it right for a woman to butcher a seal,

but wrong to harpoon one?

Is it right for a woman to cook a char,

but wrong to hook it?

There are fewer rules here

when the hunting families have moved on.

There’s a dream element to many of these poems and as they often work ‘in flashback’ it’s perfectly possible to dip in and out of the mini-narratives prior to perhaps reading through in chronological order.

The truth is the wolverine didn’t have a wife.

For some reason, females tended to avoid him.

No problem he said to himself, I’ll just shit a wife.

the biggest shite he’d shot out of his hind quarters

since he’d eaten a whole caribou a few years back

(now I come to think about it, he said to himself,

a diseased beast I found in its death throes,

tastier than you’d expect, an acquired taste, I grant you, I’ll give you that,

but I barely left a flake of flesh on the bone.)

This mix of crazy, scatological invention and detail based on hard reality is typical of the narrative flow of these short interconnected pieces which have at their heart a challenge to our twenty first century approach to the world and our place in it. While they may appear strangely disconnected in terms of the mythology there’s an underlying sense of an interdependence between life forms which we seem to have lost but also a rich tradition of bodily description minus an ornate embellishing more common in modern satirical writing.

When Kiviuq came out of the hole in the universe

he was close to another shore. He had stopped singing.

In the middle distance there was a huge naked man

roughly chipping away at an uprooted tree with an axe.

He would take each wood chip and rub it against his penis.

He’d throw each fleck of wood into the sea and each became a salmon.

The giant had his back to Kiviuq

and as he got closer he could see he was hollow:

his mouth went in a tunnel straight to the hole in his backside.

He might be sensitive about that, Kiviuq thought to himself,

and made sure he approached him from side on.

“Hullo, stranger,” said the giant, tensing his hands around the tree,

“you didn’t come up from behind, did you?”

It may be that I’ve not read enough comparative mythology but these narratives have a very unusual take on creation myths and dream elements and I can only imagine that this has to do with the extreme environment from which they originate. Tom Lowenstein is another poet/writer who deals with such anthropological extremes and I probably ought to take another look at his work. Meanwhile, I’m going to have another listen to Frank Zappa’s Don’t Eat the Yellow Snow and Nanook Rubs It, from Apostrophe which have suddenly re-entered my consciousness.