Review - "The Bridge at Uji" by Tom Lowenstein

"The Bridge at Uji" by Tom Lowenstein, pub. Shearsman. 126 pages. 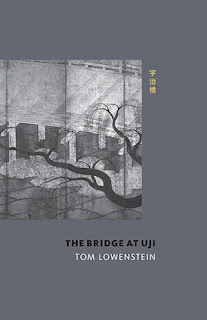 Tom Lowenstein has carried out ethnographic studies of the Inupiaq people of north Alaska, is a scholar of Buddhism, and of the Sanskrit and Pali languages and has also published five books of poetry with Shearsman. While Lowenstein's work is accomplished and broad ranging, it's not fashionable, and Shearsman Books performs a valuable service by keeping his work in print.

The poems in "The Bridge at Uji" are meditation objects, somewhat like Zen Koans; compressed, often enigmatic pieces. A whole book of such texts could be hard for a reader to digest, but the constant presence of the eponymous bridge roots the pieces in a real scene; the bridge has a kiosk and the water has damselflies flitting over it. This physical presence interweaves with the bridge as a metaphor for human life, a route of pilgrimage:

Some people I know cross light heartedly
and disdain to make a fuss. There are others
for whom a direct line to the other side
represents the ultimate labyrinth.

These lines sketch with great economy alternative approaches to life and the way in which they refer to a human lifetime (a simple bridge crossing) as, for some, "the ultimate labyrinth" is a succinct expression of how life can seem a complex struggle for some, while others in similar circumstances "cross light heartedly" (though "disdain to make a fuss" implies at least some misgivings). This four-line poem opens up wide vistas and is typical of the type of work found throughout the series.

There are many references to Japanese and Buddhist culture, including the eleventh-century female novelist Murasaki, whose statue is at one end of the bridge:

She's incapable of moving.
This is probably the easiest way to get across.
But she has no desire to do so.

Elsewhere, the texts refer to the life of the Buddha, and to Pali terms for certain Buddhist ideas. There are also references to Western culture, including Shakespeare; the bridge is where "all fools caper with their songs. And dispense crazy wisdom to the earnest". But the cultural references are used lightly and don't present a barrier to those who haven't done their homework; on the contrary, the plain language and straightforward expression of sentiments welcome the reader in while belying the profundity of some of the pieces.

Poem 27 introduces a more personal note, with a reference to "the funny looking geezer reflected in the hospital mirror" and his relation to the four-year-old child photographed with his father and sister "when news from Europe had just broken". These personal elements weave unobtrusively through the text from this point on, but always with an emphasis on the philosophical and meditative rather than on anecdote. There is humour in the texts, as in poem 37 ("A mixed blessing / this member of male equipment...) and a gentle self-mocking keeps the sequence from becoming too solemn.

Poem 38 signals a change in that it broadens out, by way of a daydream about the French alps, from the specific location of Uji bridge, allowing the introduction of other concerns, including the paintings of Monet and the music of Haydn and Mozart. As the series progresses, the bridge drops out of sight, but remains as an unspoken metaphor implied in all the subsequent poems so that they are always, at one level, reflecting on life's journey, as in this poem, which is redolent of William Blake's engraving "Death's Door":

Bless you, my door.
You have opened with such generosity.
Whether there's anything
inside, I may learn from the threshold.

Although the poems are all short, the series is expansive, and there are references to philosophy, Buddhism, art, music and, in self-reflexive passages, poetry itself ("How weak and mouldy these lines appear..."). The form of the poems varies from almost-prose to skilfully executed haiku, and all are short, with a single thought expressed in each, although some of the later poems follow on from the previous one in what is almost, but not quite, a dialogue.

The sequence taken as a whole, with its 117 poems, is a moving meditation on the human condition and has a cumulative effect on the reader; by the end you feel as though you've been on a journey with a spiritual guide while remaining in the place that you started from; the bridge at Uji, both the one depicted in the ancient Japanese screen painting on the cover and the modern one of kiosks, guides and traffic; both encompassed by these multi-layered texts.