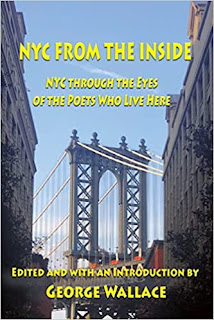 NYC FROM THE INSIDE: NYC through the eyes of the poets who live there.

This anthology has one subject, as the title makes clear. It's “New York City . . . seen from the inside and through the eyes of its poets", getting on near 200 of them, which is a lot of poets. And they are poets of all shapes and sizes, metaphorically speaking: famous household names (sic), and others not-so-famous or not famous at all. But all are serious practitioners with decent track records. The book doesn't claim to be comprehensive, although the editor believes it to be “a pretty good sample of the breadth and depth of what today's living poets …. have to offer."

As for the kinds of poetry on show here, it's varied, unsurprisingly. There are some poets I happen to know personally, and who might loosely be associated with the New York School, but they make up a very small proportion of the whole. The whole is, frankly, pretty much what you might expect an anthology of so many poets to be: a mixed bag. There's work here that was surely meant for spoken-word performance rather than the page, and there's plenty of what some people might (disparagingly) describe as chopped-up prose, and often I'd be inclined to agree with them. Just like in the world of poetry outside New York, one might wonder at times where the poetry is in a so-called poem. But at the same time there are lots of pieces here where that isn't an issue, and the poetry in the poem is plain to see. It would be silly to pick out a few notable contributions from among so many, so I'm not naming names. Interestingly, there's little that one would call very innovative or experimental; most (but certainly not all) of the poems are treading fairly conventional territories.

Regarding the subject matter, well, this is poetry about New York, and the city is written about from a range of angles: the direct and sometimes intimately personal, the anecdotal, and what you might call the loosely philosophical, on top of which those categories intermingle and jiggle around and, again as might be expected, a lot of the sentiments expressed can be predictable at times.

Of course, New York can't help but sound wonderful. The A train or the D train sound great even in a rubbish poem. The Bowery always sounds good. London's Metropolitan line or Islington simply don't resonate in the same way. At the same time there is also plenty of struggling real life, tough times and the darker side of the city in these poems to go with the excitement and romance it unarguably has in bucketloads.

This is an anthology of poems about New York by New York poets, and should be simply taken as such. A more critical assessment seems rather beside the point. There's some stuff here to really like and some, frankly, not to like. With that caveat in mind, it's fair to say it's an interesting insight into what the poets in New York are doing these days.