Review - "The Citizen" by Roy Fisher 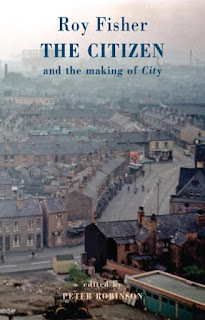 Roy Fisher’s THE CITIZEN and the making of City, edited by Peter Robinson, Bloodaxe Books

I was initially introduced to the poetry of Roy Fisher when I picked up a copy of Donald Davie’s Thomas Hardy and British Poetry in 1973 as it first came out from Routledge and although Davie’s comments on Fisher’s poetry seemed, according to the poet, rather off the mark I am still grateful for that introduction to a vitally alert mind whose poetry moved in a living world of change. When Fisher was interviewed later by Robert Sheppard in June 1982 he made his distance from Davie unblinkingly clear by referring to the critic’s ‘social democratic outlook of bourgeois guardianship’, an attitude which he also referred to as the ‘Richard Hoggart view’. It was in that same interview that Fisher also said that the human mind makes the world:

The examination of this organism that makes the world is of paramount interest. If we do not know how our minds work, and how our appetites work, and how our senses and our rationalizations are interactive, and consequently can go on kidding ourselves about the shapes we make about the differences between sex and murder, money and death – unless we know that, we’re very poorly equipped to interpret the forms by which we live, i.e. the political dimension of the world.

In terms of this ‘making’ it is interesting to read Fisher’s own contribution to Denise Riley’s compilation Poets on Writing (Macmillan 1992) in which he affirms in ‘Poet on Writing’ that for him as a poet he has ‘first to be setting words down and shifting them about…but in order to get me to write them down, word-patterns have to have at least a claim on permanency.’ Given these thoughts it comes as no surprise to read the opening editorial comments made by Peter Robinson in this exceptionally thorough edition of Roy Fisher’s early work. This new publication from Bloodaxe offer us a clear sense of the history and background to the writing of City, the poem that put Fisher’s work firmly in the frame of post-war contemporary British poetry: permanency and movement are central to a life’s work-in-progress.

Robinson’s introduction includes a quotation from Roy Fisher’s brief statement which had been appended to a ‘Jazz Panorama’ article published by The Birmingham Mail in February 1958:

I have been told my poetry is ‘off-beat’ and that is how I regard it. I do not write in traditional metres. I write in free verse. Jazz is a robust music. It is creative. It is worthless trying to play jazz if you have nothing to say. The same applies to poetry. I write about the things I see, the way I see them – cities, modern life, people and their thoughts.

Peter Robinson’s name has of course been connected with that of Roy Fisher for some considerable time and one might well look back now to The Thing about Roy Fisher, the volume of critical studies that he edited alongside John Kerrigan for Liverpool University Press in 2000, or either of the two Shearsman publications, An Unofficial Roy Fisher (Shearsman Books, 2010) and An Easily Bewildered Child (Shearsman Books, 2014). His editorial comments at the opening of this new volume alert the reader to ‘an assemblage that, substantially revised, would come to be appreciated as both a decisive poetic response to this mid-century British experience of urban demolition and renewal, and also its poet’s signature work.’ It is in the nature of substantial revision that we can see how Fisher’s interest in the moving processes of the mind can be traced through a variety of publications and this new book includes amongst other things the manuscript of The Citizen (1959), a ‘Citizen notebook’ (1960), ‘Poems included in the various versions of City and ‘related poems not used in any versions of City (1957-60),   the Migrant Press 1961 edition of City and the 1962 Migrant publication of Then Hallucination: City II.

Writing for The Powys Journal in 2008 Charles Lock suggested that Roy Fisher was ‘a master of the shifts and transitions of sight when the one seeing is not, as poetic conventions demand, walking at a poet’s measured pace, but driving a car or, as in A Furnace, riding a trolley-bus.’ The word-patterns that Fisher had referred to in Denise Riley’s book are caught for the moment on the page but, as again Robinson points out, ‘It is important to underline… that at no point was City composed and constructed as a single work. It is very much a collage, and unique among Fisher’s writings in being assembled, after composition, from pieces that are to be employed for unplanned tasks and altered by being placed next to one another.’ The permanency and movement of Roy Fisher’s work is presented to us by the editor’s choice of material in this new volume from Bloodaxe and it is of central significance that Robinson traces for us the determination of a writer who wishes ‘to preserve the good qualities of some early writing from contamination by other impulses that do not promise a direction for development, and to bring together various separate promptings into an ensemble whose whole is mysteriously so much greater than the sum of its parts.’