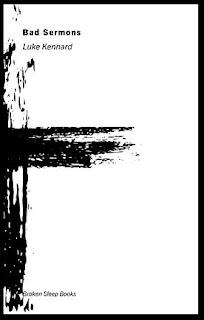 Bad Sermons, according to the end note, is an accumulation of twenty three poems/texts compiled from a ‘failed novel’ called The Cutaway with one or two italicised additions from elsewhere. Aaron Kent and Holly Pester assisted with the editing process. I have no reason to doubt any of this information which also claims that the book is ‘a thriller in 23 parts’. What we are left with then is a series of possibly interrelated poems which occasionally appear to suggest continuity but are often discontinuous. The non sequitur often appears to rule the process and the result is that of estrangement and of a surreal landscape which requires the reader to participate (or not) in deciphering these pieces and making some sort of sense out of disparate materials. Often the individual lines or sentences are ‘highlighted’ by the lack of connection and feel oddly outstanding, inducing a variety of responses from (this) reader, including hilarity, puzzlement, a feeling of being charmed and/or the desire to inhabit the text and create a suggestion of narrative.

We are driving into this driving rain

She  climbed  under the  table and  carefully lifted each leg

in  turn,  picking  out  and  brushing  away a  dusty piece of

corrugated cardboard under the first, a torn beermat from

I waited as I always do.

We’ve started now, haven’t we? In all honesty.

This isn’t a door: there’s nothing behind it.

The process involved here reminds me a little of a project published by If P Then Q where Peter Jaeger ‘reduces’ Proust to a single topic by extracting specific sentences to create a different reality. The syntax is as expected even where there are no full sentences but the gaps between the individual lines/paragraphs which are indicated by double-spacing creates a possibility for invention and bewilderment. I’ve little idea obviously about the original novel and how the ‘editing’ process was undergone in terms of the selection process but the reader can take a page at random and attempt to fill in the gaps, creating a presumably different narrative to the original. As I’ve suggested above you are also encouraged to focus on individual lines and make of them what you will while often being focussed on the strangeness created by the dislocation.

The shop was sparsely furnished and stocked –

a jar of mayonnaise and a bottle of ketchup displayed in

isolation in the middle of a shelf,

her friend was busy

She handed the leatherette book back across the counter.

‘To cover her arms.’

in a foil tray

the lines clear and well-defined,

a natural and necessary extension

he rummaged in his suit pockets

The sky was just starting to lighten.

‘I had no intention of making him feel better about himself.’

her back to the double door

which is all humour really is.

There is humour here as well as a sense of estrangement and the constant possibility of being taken off at a variety of tangents. I read it through quickly on a first reading and then took it more slowly, pondering the mechanics of narrative and the strategies of the method. Entertaining and puzzling. 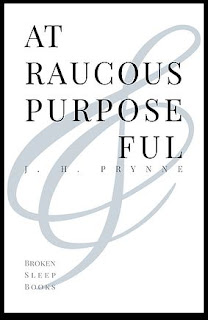 It’s good to see that J.H. Prynne is still at it. This series of ‘ten parallel prose exploits’ often made me giggle I have to say. Although there are several formats including split page (meaning you can read across and down), a tab ploy that looks like centring but isn’t and blocks of prose with an occasional shift in line-length, the common ground is that it all appears pretty ‘blockish’. The texts appear mainly as long lists although there are a few connectives and conjunctions which seem to be pretty arbitrary. There is repetition across the different pieces though you’d be hard put to nail this down and a sense of continuing motifs or ‘topics’. These late prose poems (?) from ‘the master’ put me in mind of recent work by Clive Gresswell and indeed Tim Allen and also earlier work by Drew Milne who was clearly influenced by Prynne at some point.

Here’s an extract from VIII (page 17) which will serve as a flavour for the whole:

radiant  foreign  current  deplete   falchion along together other

It’s effectively a series of endless list with the occasional comma or other punctuation mark. You could try and construct a narrative (or a series of narratives) around these lines and the possibilities are endless which I imagine is partly ‘the point.’ Alternatively I see the possibility of a performance piece being extracted from the above. Try reading aloud or ‘in your head’ in order to get a sense of the sounds and impacts of the individual words and syllables brushing up against each other. I get a sense of fun and of play within the above but it’s clearly not for everyone. I love the overall title which implies at once a sense of purpose and a hint toward the ludic even if impenetrable. This is writing at the edge of meaning and in the right mood it brings a smile to my face.