Review - "A Country Without Names" by Martin Anderson 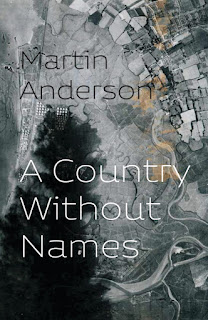 Martin Anderson’s latest collection leaves a bittersweet taste, dealing as it does with the beauty of the natural world alongside a path of destruction and violence, mainly caused by humankind. It’s an eloquent testament to the failings of capitalism and human greed and the combination of a near- documentary style at times with that of lyric cadence is almost too much to take. This, from the frontispiece, for example: ‘A strange soundscape of menacing bombers and incessant nightingales / singing … in the midst of human destruction and violence’ (David Rothenberg, Why Birds Sing).

Like Kelvin Corcoran Anderson crosses historical and geographical boundaries, suggesting that things went wrong from early on though clearly post-industrial-revolution matters have moved on apace. I’m reminded of a quote from Andrew Duncan here, and I’ll have to paraphrase as I can’t locate the source, where he’s talking about Scott Walker’s album Climate of Hunter where ‘the damage’ may have started as early as in Neolithic times. If this all starts to sound a little ‘fallen world’ in a Christian sense I can only say that a critique of human folly has to start with the worst of which we are capable and there is certainly something of a moral assault in this poetry which is both dark and beautifully evoked.

The cover artwork is an aerial view of The Thames taken by a Luftwaffe airman and includes an area of dark smoke, the aftermath of a bombing raid. Anderson makes a connection with Conrad’s Heart of Darkness via the geographical location and there are other occasions throughout where myth and history intertwine in a projection of human conquest, war and empire building. The cover leads neatly into an early poem, ‘Road to the North,’ prefaced by a quotation from Homer and where we get the following:

Suddenly at the end of day, spectral trees blown

against the window, my father appears before me, marching

leading a shabby contingent of ghosts. They pause,

and then, the sound of half-empty canteens

slopping at their waists, approach. I watch them, as if

through a stirred-up haze of dust, fragments

from a broken century, their laughter

and song drifting, as they march,

through time’s porous and permeable borders

into our own, dissolving all horizons

and distances, shedding the dead weight

of months and years, to appear before

me, reinvigorated. Ghosts, feeding on my blood.

There’s a cinematic quality to these ‘ghostly presences,’ imagery which features elsewhere in this collection and which aids the notion of ‘time’s porous borders’ as suggested above. This is how memory works, not in a neat chronological space and there is a reference later in this poem which suggests I think ‘Dunkirk’ (‘Years later, chest deep in water, waiting / for the small boats to ferry us,…’) which is followed by a quotation referring to an incident in Haifa (home of the Baha’i) where the occupants were “… left standing, bereft, without a home or food / or means of subsistence, in their own country.” There’s complexity here but these snippets and juxtaposed memories/quotations suggest a history of damage, colonialism and despoilation which permeates the texture of Anderson’s writing. It’s an uneasy read as I’ve suggested, an experience which is coloured by the often lyric tone. There is also a hint of nostalgia. Nothing here is easy.

The opening poem ‘Rock Star Celebrates Birthday / at Exclusive Country House Retreat’ (a passive parody of a title!) sets the scene in fact with its caustic lines:

of a rapacious age. History narrating profit with loss.

Celebrity hedonists frolic amid its bric-a-brac.

Reluctant, atop their leafy sylvan slope, to engage

with what – head of walrus, polar bear, taxidermy

of arctic night – beyond all wealth, privilege

We have here an example of excess and of consumption of the world in a non-heroic age where waste is a given and where exploitation is to be embraced and encouraged and where ‘ownership’ and display are the greater good. One hopes that Scott is ‘spinning in his grave’ although such historical reminiscence brings about its own sense of complicity and reflection.

In ‘Where No Snow Falls’ we are at a time of early ‘Greek mercantile expansion’ in the Mediterranean where we get:

It was clear to their companions

before they left, from ominous mutterings

about ‘this bordello of a world’,

that their journey was not to

But to gratify avarice. A boy’s dream.

When juxtaposed with a description of the victims we have the following:

Others in leaking boats,

wash up on perilous reefs.

Or in the deep sea, wallowing.

in flames. Some drowning

in sight of their own lands

from which the despoilers

We could as well be in the contemporary world and again this writing reminds me of strategies by both Kelvin Corcoran and Christopher Logue (in a slightly earlier time) where connections are made between different periods even where there is a necessary distance or estrangement. I’m guessing here but I’m inclined to think that this collection is at least partly a product of ‘the lockdown’ and the pandemic where among other things bird song has become a much-commented on feature. The fact that we are now seeing war closer to home is an added factor and possibly one that Anderson had anticipated.

In ‘Uncomfortably at Home’ we have the following: ‘Liberally, richly festooned now with litter / of a nation hopelessly addicted to endless consumption. Swept clean each day by / an array of cleaners, remunerated by / a state grown wealthy from centuries / looting overseas possessions.’

There are a series of ‘Chinese poems’ where once again we have great lyrical beauty, as exemplified by the aesthetic and imagery of Chinese poetry and its associations with the natural world, which is interrupted by suggestions of displacement and warfare. The final poem in the collection, ‘Nostos,’ encapsulates the predicament and is worth quoting in full.

Always it is the same. History

is a handful of tired pieties, predilections:

animosities of attachment of grasper

and grasped. Affirming a transitory

and tenuous existence, the plenitude

of a present which cannot last. And

its last moment is also its first

in an infinite series of moments reviewed.

The diffused aromas of a lost

summer hover around a faded grey

gatepost in  a field. Discarded

fragments of a life surrendered.

One to come: beyond this moment,

hesitant, but sure. One, the spider

spinning in the wainscot a new

death and a beginning for us, we are

reluctant, mired in the immense nostalgia

for all lost moments, to forgo.

What I’m getting here is a sense of loss, of disappointed hopefulness, perhaps underlined by an almost Buddhist recognition of the inevitability of suffering. A final quotation, an endpiece after the text is by Olivier Messiaen, from a preface to his score for Quartet for the End of Time – “In my hour of gloom … what is left for me but to seek out / the true, lost face of music somewhere off in the forest… / among the birds.” Here we have an image which recurs throughout the collection and which seems an appropriate ending for a book such as this. A Country Without Names is not an easy read and it’s one which leaves the reader with a lot of unanswered (perhaps unanswerable) questions.