Review - "The Last Days of Petrol" by Bridget Khursheed 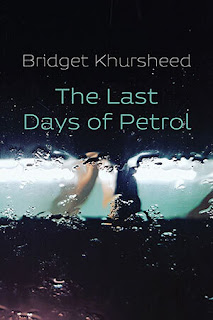 “My interest is in ecopoetry . . .” says the author on the back cover. Among other things, Ms. Khursheed cleans canals (“I am down here cleaning out the leaves….” ) and writes poems. A jury will decide which of those activities is the more laudable. And ecopoetry as a thing sounds very 21st-century, don’t you think? (Discuss)

As with many other collections of poetry that announce themselves as having some kind of theme the stall is set out on the first page and, in this instance, in the first line of the first poem: “How did we get here?”, and it’s no surprise that in many of the poems the natural world is in an uneasy relationship with the ‘unnatural’ world of people. Plus, we are definitely doomed:

the tide is coming in and will
wash up the beach, next the cottage
. . . . . the tourists, the viaduct
where our car is parked, eat up our very home

Elsewhere, in a poem on page 51we have “tidal slop / of toothbrushes and tampons and wire and algal bloom” followed on page 52 by a longer catalogue of shoreline garbage, including “ wires, beakers, nets, four footballs ….” The list goes on for several lines.

The best poems here are the most straightforward, and speak for the theme without recourse to mentioning it. “Dragonfly” is pretty good:

He sits by the gate’s latch flat against the red bricks
and watches nothing.

It’s pretty good because it’s direct and concisely objective. “Hedgehog” is also alright for more or less the same reasons. But not many of the poems are like that, and others do that poetry thing which is the opposite of straight talking, where the reader is dumped from the off in medias res, but a slightly poetic and obscure middle of things, and is left to find their way, so a poem that is, as far as I can make out, about compost, begins “Easy as an egg, the green crust breaks/ breathing smoke” and continues in the same vague but undoubtedly poetic vein: “ No science manages our intercourse / and by tidying the old iron sheet / the population is lost.” I think that bit’s about worms, because the poem has mentioned worms by that point, and also I have gardened.

Of course, nobody is likely to tell an award-winning poet (as Ms. Khursheed is) that a fairly decent passage of poem like this

We circle our world
ridging the space like curled serpents
but our fragile homes built on aerial dreams
as a matter of fact share nothing.

is spoiled by that rather too-poety “ridging”, or that on the following page the sparrows are doing great until they “vector” and “make an astrolabe / demonstrating all the planets”. Instead she’ll be congratulated on the poem-ness of it all. And there’s absolutely no point in pointing out that in a poem where “a shoal of blackbirds” has just shown up, the final line - “I wake myself to follow.” - is horrible in more ways than one.

An editor, as opposed to a reviewer, could have pointed out a few other minor issues: for example, that commuting is mentioned a couple of times, and “pixellated” also occurs twice. The “shoals” of the “shoals of blackbirds” already mentioned had been used before too, only that time it was for starlings. Using a collective term for fish when you’re talking about birds works kind of okay once, but twice? On page 59 there is “bermy”, and on the next page is “berms”. And yes, I had to look up “berm”, as I also had to look up “Mustelid” and “spraint”. The latter appears on page 63, and on page 64 there are “droppings”. They are the same thing. This kind of attention to detail would make a difference, simply by dint of the duplications and repetitions not being there instead of being there.

While we’re on editing, there are two poems in the middle of the book that don’t seem to have much to do with the general theme:  “Thoughts on an oatcake”,  the epigraph of which tells us that the oatcake in question was “taken from a dead Highland soldier after Colloden”, and which seems to be about a museum exhibit, and the poem that follows, “Jethart snails”, which is about sweets . There is probably a reason for their inclusion but what it is escapes me. Surely it can’t be to make up the numbers.

Editing issues aside, this isn’t a bad book, and it’s general ‘message’ is to be applauded, but as a collection it’s kind of par for the poetry course: poems that are well-executed (with a few caveats) and very much ‘on trend’ in terms of subject matter. Whether or not poetry should be ‘on trend’ is for another day. The problem in a book comes when you kind of know what the next poem is going to deliver. Here, nine times out of ten, it’s going to be the poet in a setting that’s either wholly ‘nature’, or ‘nature and modern life together’, with a decent chance of the poet walking or driving around pointing out the subject to the reader. There’s nothing intrinsically wrong with that, though it might not be to everyone’s taste. But it becomes a tad wearing through 77 pages when the point was made in the first poem, and the poet is going over much the same ground page after page. Of course, loads of poets go over the same ground page after page, but the evidence suggests that it’s possible to do it without repeating yourself. (Discuss.)