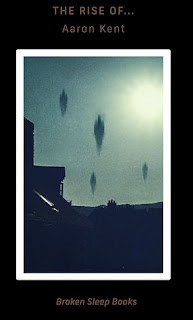 Although it deals with the writer's traumatic personal experience, the long poem in this book is a skilfully-wrought poetic artifact, which it needs to be to do justice the experience it describes. Apart from a short poem which acts as an epilogue, the work is a single long text, laid out as double-spaced prose. It is a direct address to the reader and is straight-talking from the first sentence:

There is an interesting use of tenses here. The perfect tense of "i had written" sets that action (almost imperceptibly) in a completed past, implying right from the outset, that the speaker is now in a new phase. Similarly, the conditional "i would pretend" has a different effect than if the poet had written "i used to pretend" or "i pretended". Although not immediately apparent, this is subtle stuff and indicative of the writer's skill.

From the arresting opening statement, the text is a compelling read. I read it at a single sitting and was completely gripped. The style is plain and the forward momentum relentless, enacting the speaker's state of mind in the aftermath of sexual assault. Then a few pages in, something different happens:

When i reached to grab the blankets my arm was entangled in a large ugly long purple treefrog... The frog was fully capable of sinking its spikes into my right leg and i was completely petrified I fell onto the bed trying to get away from the tree frog

This extraordinarily powerful passage draws on techniques of surrealism (interestingly the cover artwork seems to borrow from René Magritte) and its associated dream-imagery. Later in the text there are metaphors of the sea, a submarine, a shark, as well as imagery of wounded and healing flesh, all of which takes the text beyond what could be achieved by the bald statements with which it opens.

The whole piece - around forty pages - is a first-person monologue that traps the reader inside the speaker's head; other people are mentioned but are incidental, thus enacting the way that trauma can drive a person inward. As the text continues it deals directly with the abuse and the abuser, and also with the spiritual nature of the speaker's recovery (“rapture” is a key word in the text) showing both acute psychological insight and the sort of technical skill outlined above. The speaker moves towards acceptance without recourse to any easy consolations:

The imagery of the boat is then taken up in a moving final passage that hovers between being spiritual and psychological, but which – given the unflinching descriptions that precede it – is well-earned.

For a short text (40 A6 pages) "The Rise of Aaron Kent" covers a lot of psychological ground and seems the sort of work that a reader will return to, and which, over time, will provide a profound understanding of the state of mind induced by the trauma it describes. This is the first work by Aaron Kent that I have read, but I will be reading more.