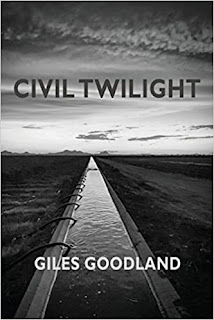 I’ve said this before: too much poetry (and art) outside the mainstream may be filled with interesting ideas but is too often unenjoyable to consume or experience. The customer surely has a right to ask for some degree of pleasure, otherwise Why? Anything good that comes after enjoyment is a bonus. We can figure out what it all means or doesn’t mean or, more likely, what we took from it, when the dust is settled. Of course, invoking the pleasure principle immediately reminds us that one reader’s pleasure is another’s pain, and vice versa, and all things between. But a reviewer is giving an opinion, not a fact set in stone. And so we review on, and make friends or upset people in unequal measure.

My reason for beginning this review by speaking about enjoyment is because the first piece in Giles Goodland’s “Civil Twilight” is something of a delight (not exactly the correct word, but it rhymes with ‘twilight’). It’s in prose, and impossible to quote from, so here goes:

. . . the dual individual, trees indexical and brightening towards the east, the suicides calling from the sea, conversations with the wind, what words talk about when we’re not using them, a raft of measures, the knowledge that sucks the telephones black . . .

There’s about four inches of this kind of thing, and I like it. The thing is, when you start off your book like that you’ve set the bar quite high for what comes after. Of course, that doesn’t matter if you don’t care.

For a few pages following, things are quite promising, especially “Wren”, which I like a lot:

This had me thinking that life is not as depressing as our leaders are trying to make it. There’s a way with words here that makes reading the enjoyable experience one longs for. We are informed that Mr. Goodland is, or has been, a lexicographer, and that informs his poetry, apparently. On the face of it, this would appear to be true, superficially at least, for the word “word” or its plural crops up quite a lot. You will have noticed the “what words talk about when we’re not using them” quoted above, and there’s more, for example (from other poems):

The geese call suggesting
our sky has been crossed
by a limitless word, falling

We want all the words at the
same time, we want no words, no
time, just language’s long rain.

And if it’s not words it’s names:

This concern with words and names and things –

Harks back to the book’s opening piece which I neglected to mention is called “The Language”, and these snippets demonstrate a lightness of touch in the writing that allows the reader to enjoy reading the poems and put off thinking about any intellectual concerns until maybe the second time around.

But, my word! A few warning signs don’t take long to appear. Poems about the poet and (what I assume are) his children begin to show up, and while they retain some of the linguistic elegance and dexterity already noted they are, on occasion, a little strained:

The playground swing ground to a halt.
There were the birds’ phatic songs.
We sat and drank hot chocolate.
A squirrel came forward. I had popcorn
left in my bag. It took a piece
delicate-fingeredly turning it:
a jeweller assaying for jewels.

Increasingly the poems attend to the everyday – what literary folk and the book’s blurb writer prefer to call the quotidian. They could just as easily call it dull, but they rarely do. Here we have, for example, a poem in which the poet is in his car and is held up by tree-fellers, and a poem in which the poet is on his bicycle and accidentally runs into a woman walking her dog, and some poems where the poet is on holiday and where the opening lines can be, frankly, leadenly awful:

In the summer of the year of the latest crisis,
the news breaks upon the managed
coast of a Mediterranean city.

There are a few poems that happen on trains, with the poet either looking out the window or at the other passengers:

Everyone on the train is sneezing
energetically and saying sorry and bless.

This is by the same bloke who wrote the first piece in the book, which was obviously written on a day when his head was in another gear. But if the evidence here is anything to go by the poet is unable to distinguish between one day and another, and whatever happens on any day, no matter how ordinary, it can be written about and Hey presto! it’s a poem! As a strategy this has worked for some other people, but it’s not always worked even for the best of them. When it doesn’t work, the results can be tedious, or monotonous, or both.

All this comes with the additional burden that in too many of the poems the poet evidently feels he has something important to draw from these observations of the beloved quotidian. A poem begins with the council garbage men collecting the rubbish, and goes on to say that

A song is made from the gearing and tipping
and occasional shouts of the workmen.

. .
these songs lead eventually to a square
in a town’s neglected quarter
in which the untended rose-bushes
still give out a scent that no one
names despair. This too is song
as in expression, as matter
rusts and exalts.

I think this is tiresome, but others may like it. I confess I didn’t make it to the end of the book, and only got as far as page 51, which is the title poem. (I think it’s best I don’t say anything about the title poem.) By that time I’d had enough, and couldn’t face the prospect of another 20 or so poems that a quick scan showed to be in similar vein. Plus, one of them is called “Turd”. I should say, though, that along the way there had been a handful of poems I earmarked as worth a second look, such as “Forked Star”:

The clash of two nothings makes a kind of
motion; bluebell-tremble, thoughtswing.

but there’s not enough of that kind of thing, and when it occurs it’s too often blotted out by some fairly boring everyday occurrence rendered boringly. After that opening prose poem, where did it all go wrong? Well, a chap can write too many poems and become repetitive. I noticed a few storm-drains: in one poem the storm-drain whispers, in another it murmurs. “Three swans overfly” on page 34, and on page 35 we get “Two swans above the Union Canal.” If not repetition, a chap can think a poem called “The Day of the Drive” is worth publishing even when it’s basically little more than a blow-by-blow account of a car journey, and really not interesting. It’s difficult to forgive not interesting.