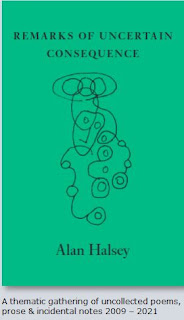 Sometimes, one reads books that on the surface seem easy, even easy-going and yet there is an underlying oddness to the writing that makes one want to read on. This is that kind of book.

On the one hand, these poems can be beguilingly personal – the prose poems about his absence from family photographs, for instance – on the other hand, they can be intriguingly bookish or learned, as in the poem that starts ‘A postcard I bought at John Ryland’s…’ (p31). Because this book is so wide-ranging in subject matter, going from notions of heritage, family dynamics and memory to George the 3rd, the Restoration Court, dystopias to psychology with a breathless energy, it’s hard to say exactly what ‘theme’ this book has. What unites this book, though, is a sardonic wit and energy that is both restless and often micro-focused.

To get a flavour of the book, here is a whole (untitled) (shortish) poem

Why did Years Eliot & Pound
pretend in their youth
to be old guys?
How useful a disguise
How profound a truth?
If you’re young Discuss.

-That funny old codger
fussing in his garden
about which plant goes where
& what counts as a weed
was a poet once
and some days even now
you’ll see him pull
not ‘those girls’ but
a notebook from his pocket.

Still scribbling’n’quibbling.
Still saying he intends
to get it right in the end
face up and phrase perfect.


The language is conversational and direct, and there is nothing elaborate or even particularly difficult about it, yet it leaves a distinct flavour behind, that actually one finds in late Yeats. This seeming ‘plainness’, of course, hides a great deal of erudition.

That conversational mode is reflected through all the poems and prose poems in this book, whether he’s talking about Ivor Gurney or his strange absence from his mother’s photographs or pangolins in Lee Harwood and Marianne Moore. Halsey’s voice is very genial; but beneath the voice is a lot of hard talk. Politics and poetics dip in and out and duck and dive across these poems and you can reach the end of a poem before you think, “what did he say?” as in England in 2019 (p80), which is about the perils of landlordism:

you considered your property…

The language here is radically unpoetic – not a metaphor or simile in sight – and the triplets seem to work against the sentence construction (it’s all one in 27 lines) like synchopation in a jazz standard. In fact, this whole collection has very few if any poetic devices except line length and occasional forays into a kind of rough ballad metre.

I’ve only really scratched the surface of the variety in this book. Variousness has always been important to me as a strategy. Poets such Peter Finch and Edwin Morgan are more important influences on me than I sometimes give credit to, and Alan Halsey is another one of those poets with a restless energy that I can read without ever getting bored.