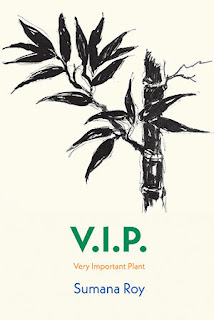 It’s apparent that in her poems Sumana Roy has “something to say”. Fair play to her.  But I’m not convinced by the way she goes about the task or what it is she is trying to say. All the poems have plants in them, but they are not “about” plants, as such; I shall say more about this later. The majority of the poems begin with a statement, and very often you could be forgiven if you responded with a “Really?” Here are some examples:

An arc is a straight line that got bored. (“The Geometry of Trees”)

The harvest of appearance is our first toy. (“Eating Light”)

I don’t know what any of those lines are supposed to mean. Bits of poetry that leave you a bit puzzled are fine. At least, they are fine if they contribute usefully to a poem that one is able to interpret in a conventional way. They are also fine when the poetic strategy is language driven and the poem is not ‘about something’ in the traditional sense. But these are not those kinds of poems, they quite obviously each have “a meaning”. Those lines sound as if they mean something, but do they? Opacity and obscurity used just because they sound poetic do nobody any good.

The poems can say whatever they want to say, but whatever it may be I struggled with how they say it. Here’s a metaphor and a simile to be thinking about:

Death is a suitcase bursting open.
It is always readymade,
like a piece of wooden furniture.
(“Do Not Insult Death”)


I’m not sure lines like these should be thought about for too long, because they are nonsense, and no amount of thinking about them will explain in what way death is a suitcase bursting open, or reveal in what way wooden furniture is always readymade. There’s loads of that kind of thing.

That a lot (and I mean ‘most’) of the poems apostrophize (as in address) a “you” is confirmation that they are not really about plants, but that the plants are a means to say something not plant-related:

This is the thing about tears –
how they come from different sources
but end up in the same bin: the eyes.
Just as so many agricultural fields end up in our gullet.

You turn to trees to look for the same –
the dust of elsewhere in the freckled wind,
the anger of temporary famines in their roots,
the complaint of stars in the light travelling from the sun.

For the tree, death is only an impurity.

(“How to Console a Dying Plant”)

When you finish a story, you become a tree,
As self-contained as song, as patriotic as an address.

Grass is always middle-aged. Like your desire.
Here, lying on it, at the eye-level of crawling ants,
you are miraculously restored as grass –
And you become the difference between ‘together’ and ‘altogether’.

Grass is always middle-aged? I have no idea what any of that stuff means. After living with this book on and off for a week or two I’m fairly confident I’ll never know. Again, the book is full of that kind of thing. Just now, opening at a random page, I read that the curves on a potato are the remainders of lost journeys. I will never look at a potato in the same way again.

In among all this there is probably a celebration of plants, though for the most part it’s quite well hidden. When it’s more clearly on show, as in “The Cherry Blossom on Rüttenscheider Straße” –

– the poem still comes with its dubious poeticisms that don’t withstand a rigorous interrogation:

The mumble of shy pink,
the loyalty of softness,
of petals pretending to be strong,
as strong as a vow.


The cover blurb promises poems that ask “How might it feel for plants to live social lives as humans?” I had trouble trying to make sense of that, partly because of the clumsy language, but mainly because it’s an idea I couldn’t make sense of. The blurb continues: “In V.I.P. ‘plant’ replaces ‘person’ to become Very Important Plant. In this new cosmology, leaves and fruits and roots are seen as perhaps they have never been before . . .” Frankly, the poems don’t deliver that, and plants “seen as perhaps they have never been seen before” doesn’t happen. No way does it happen. The title poem, the poem that gives the book its title, is about a peepal tree planted by Barrack Obama as a memorial to Mahatma Ghandi and seems to be trying to say something about celebrity:

This tree, suddenly V.I.P., etiolates a new folklore.
Everyone was once born a stranger.
Importance was such profligate art.

The Obama tree is dying from this accident, this post-partum depression
of being a mimic celebrity, from being a stranger to importance.

I suppose you could argue that the tree here is “personified”, which is not quite the same thing as living a social life as a human. The poem concludes:

I could plant a Weeping Fig in its stead.
But even the imagination gets injured.

Fame is such a waste. It can’t even be recycled.

While the poems all revolve, like this one, around some kind of plant, the plants don’t do anything other than act as vehicles for whatever idea the poem thinks it’s about. A poem called “Onion” is not about an onion, it’s about death. And most of the poems are full of the sort of statements I’ve already quoted: “To be inside a forest is to be part of an invisible autobiography.” “Roots are comic, like religion.” “The shape of branches is a weak attempt at comedy.” “We like things without bones.” There’s plenty more where they came from. As I said at the outset, Ms. Roy has something she wants to say but it’s hiding behind language that is too abstract and what some people think is poetic for its own good. But while mainly I don’t know what she’s getting at, I do know what this book is not. It’s not plants living “social lives as humans”. Perhaps that’s a good thing.