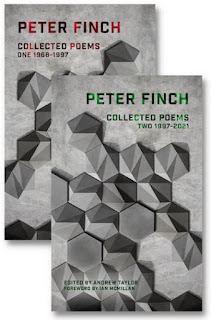 A typical Finch poem is… er no that doesn’t sound quite right… Throughout this collection Finch… no, that doesn’t seem right either… Generally, Finch’s poems are characterised by… Nope. That doesn’t get us anywhere…

Look, the thing about Peter Finch’s poems is that there is no such thing as a typical Finch poem. Well, that’s better, but it really doesn’t cut the mustard either. One stream of Finch’s poetry over the years is the visual poetry, featured largely in the first volume but a continuing interest throughout his writing career. Another is what one might call process poetry, where one sets up a way of generating poetic material and then manipulate it through a deliberate or chance generated technique.  Take, for instance, which starts out with a familiar line from an R S Thomas poem: “Just an ordinary man of the bald Welsh hills,” becomes a list of phrases around the theme of hills, then becomes:

and becomes a commentary on the media image of Wales. Somehow, he has gone from rural Wales through sound poetry to cultural comment and personal stories.

The surprising thing about this collection is that despite the strangeness and difficulty of some of the poems, there is a very democratic spirit to the whole kit and caboodle. You might think that a poem which consists of a photocopy blur and daub might be off-putting and impenetrable, but much of the time there’s a real pleasure in them and a connection with a readership (or perhaps a viewership) that is really inviting. The poems from the Writers’ Forum book Dauber, for instance, hint at then idea of haiku without telling you what to think and are visually stunning as well.

Most of these nearly 1000 pages of poetry, however, are not visual poems, and they vary between performance silliness like Modern Romance, based on cut-up Mills & Boons novels:

To a personal account of a visit to the urology clinic:

hardly anything hurts here
front of the internet
finding out where it came from:

From the first poem, in the first volume (a delightful comment on ‘60’s activism), to the final poem of volume 2, a one-word poem dedicated to Edwin Morgan, this collection is a delight. A gallimaufry. A compendium of forms. A dictionary of discovery. A mixtape of marvels. A variorum of voices.