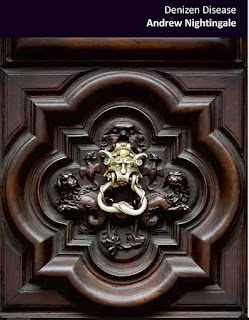 I can recall quite liking an early chapbook by Andrew Nightingale but being unsure how good I thought his poetry was. I haven’t followed his work closely since then but this little Red Ceilings booklet is a real peach. I love the A6 format, the neat cover design and his wonderfully baffling but intriguing poetry. It’s a book in four parts, each having a theme of sorts with all kinds of tangents and ‘interventions’ which tend to induce any readers (this one in any case) to bring their own thoughts to bear, which is how it should be. There is often an apparent ‘argument’ or clear sense of direction in these poems which veers off into mystifying but thoroughly entertaining alleyways and I can’t better Andrew Jordan’s back-cover blurb encapsulation which goes thus: “His poetry is engaging and perplexing and enjoyable. It tells you a deep dark secret and then ensures that you immediately forget what you heard.” I can imagine there are potential readers out there who would be infuriated by such ‘tactics’ but I found this book a wonderful read, full of interest, diversions and very fine writing. The wordplay, textual balance and overall sense of structure kept me enthralled even allowing for the puzzling nature of the work.

In ‘Turin easy: a weak poem’ we have the following diary extract:

prone as it is to give up its cargo

I beg Nietzsche’s ghost for analysis. He says, illogically,

stop hitting the horse and I answer.

And the strong rise, the mediums trance, the

the step in the back occurs and a dancer dies

histrionically (do I mean historically?)

Anyway much as Michael Roberts, her patron,

through the wrong end of a magnifying glass

where every day leaves unfinished leavings.

Apart from the wordplay (‘Turin’ is played with throughout the text) and the possible reference to the Yeats poem I’m struck, on re-reading, how dark in fact this poem is. There’s so much here, amid the humour, the oblique surrealism and compacted historical sense (then and now?) which implies violence and an uneasy yet somehow glamorous environmental situation. There’s a political element throughout which is wonderfully underplayed. This ability to meld comedy with serious stuff is enacted throughout this short collection and is one source of its success.

From ‘Tea dance in nine songs’ we have the following:

then ceremonial smoke and the flight begins,

the shaman’s tongue forks, she swallows the knife

and coils up into the air. She aspires for the West

where she will tinge sunsets Krakatoan pink.

The opening resonates as in ‘Bewitched, bothered and bewildered….’ which ties in with the first line of the previous poem ‘Turin easy….’ where we get ‘To thoroughly, inexplicably and righteously / fail to go….’ which hilariously recalls the split infinitive joke from the Star Trek line (‘To boldly go’). These little gems are like conceits and are splendidly ornamental as well as having something to say, as in the following:

The lag is lazy and slow, too easy

for one with the confidence that comes of being

red-blooded with the consequent right to rule,

quell, explain and repeat. Behind the beats behind

a subplot is elaborated, an unwritten counterpoint.

From ‘Bean exiled’ we have the following and this time we’re talking coffee, Turkish or perhaps something stronger:

2. Meeting with an old enemy

He sunk the plunger

then chinked my cup, lip to lip,

Outside this dream, he said,

we are the same person

One thing that I love about these poems is that the information contained therein can give rise to all sorts of thoughts and associations, some no doubt intended by the poet but others generated by the reader’s input. All the best poetry does this, of course, and I so dislike those poems which try to nail down ‘the meaning’ to a single outcome. The above piece is both minimalist and suggestive of other worlds and of expansive horizons and is all the better for it.

Finally, we come to ‘a new feudalism’ which comprises 8 prose blocks or possibly a series of prose poems, you decide: ‘Keep showing us glorious private / heavens in public spaces, the same secret / desires written plain on pained faces.’  Or take this opening from a later piece: ‘Floodlit wings skim a Petri dish of tourists. / This seagull is traversing various landmarks and monuments. No meaning is created outside its brief impenetrable flights. Glide and silence, obscure purpose.’ This shift of perspective via a meandering dreamy introspection which concludes with ‘We live through  / periodic absences of winter.’ brings to mind ‘It Just Might Be A One-Shot Deal’ from Frank Zappa’s Waka/Jawaka where the hypnotic state is all too brief if wonderful. There’s a political underpinning to this section which hints at analysis but is also temptingly elusive, allusive and elusive, in fact:

once the domain of the aristocracy. Desks

are placed next to marble fireplaces and

cabling is routed through flock wallpaper.

Workers wait patiently for the inevitable

step that follows but it doesn’t. Maybe not

into Liberty villas yet. The inevitable fails to

be. Minor forays into once public spaces,

our handbags close. A hungry wolf comes to

the edge of the village to scavenge. I love this

The above seems to suggest the failure of a classic Marxist interpretation of the inevitable demise of capitalism yet also hints at the increasing anxiety around current world crises. The final line leaves a sense of hopefulness amid the chaos and comes as close as Nightingale gets to political analysis in this wonderful set of poems. Not that political analysis is what these poems are all about but it remains an aspect of the overall work. I’m sure I’ve missed a lot of the subtlety of these poems and even more certain that a different reader will see alternative ways of looking at them (there’s certainly an ecological aspect to these poems which I’ve under-mentioned, for example). That’s what it’s all about, after all.

I’m very glad I came across Denizen Disease and look forward to reading more of Andrew Nightingale’s work. Red Ceilings Press are to be highly congratulated on an array of mini-booklets which add a lot to the contemporary poetry scene.