Review - "Into the Interior" by Kelvin Corcoran and Alan Halsey 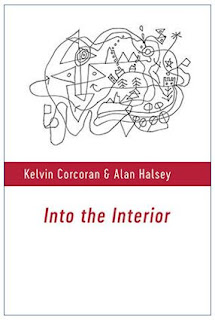 “Into the Interior” by Kelvin Corcoran and Alan Halsey, pub. Shearsman. 21pp.

Over the years Alan Halsey has developed a distinctive and striking body of work as a visual artist. At the same time, Halsey and Kelvin Corcoran have worked on a long-running series of collaborations which has resulted in a some very interesting poetic-artistic works. This latest production shows the fruits of their long partnership, displaying an easy rapport between the poets. The spur for the poetry is a series of line drawings by Halsey to which he himself appends a rhyming quatrain; Corcoran then responds to this with two quatrains on the facing page. It's a simple but effective formula. As far as Kelvin Corcoran is concerned, this type of collaboration plays to his strength, which is his lyric facility; freed from the narrative and didactic aspects his poetry sometimes displays (both of which, I should add, can produce powerful results when combined with his lyricism) his poetry sings. Here's an example, starting with Halsey's artwork and quatrain: 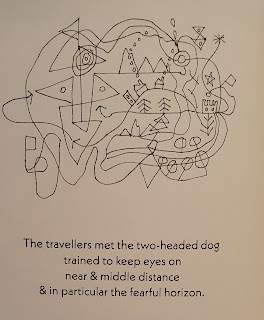 to which Corcoran responds:

Alan I've been out to Parc Malou
a cold morning of it along the track
through the devastated trees after the storm
nothing but dogs and corvids in possession.

Kyiv is burning and I sit here dumb
looking into the interior unmapped;
to see your mind at play is everything
in the toytown tangle of fearful horizon.

There is a sense of easy (and writerly) companionship between the two poets and a real affection, but as always in Corcoran's poetry, language is at the forefront: 'toytown tangle' is a striking phrase which is also a neat description of the mess humans are making of their world, with 'tangle' giving a faint impression of the tangled weaponry and buildings of Ukraine. But on the whole, in this sequence, the drawings are imaginative, the writing is playful and the language has at times a real beauty:

Pilgrim, pilgrim stretching the lines of speculation,
the slip of moon above the dark wood dreams,
the trees sway as one, the oak, the beech, the ash;

The title of the sequence implies a journey of some sort, and throughout these pieces there are references to such, indeed to a pilgrimage of sorts, and the quest of Browning's Childe Harold is explicitly invoked. The journey may be a metaphor for searching for a way out of the crisis, both political and environmental, that we find ourselves in. A key line is:

...the way through is just a feature of composition

Which makes sense, as this is a dialogue between two poets trying to find a language that might do justice to our contemporary situation. In the end, the search is for solidarity and companionship:

Alan … to see your mind at play is everything.

All of which might give the impression of solemnity or seriousness, whereas in fact this little sequence is light and airy, a playful improvisation.