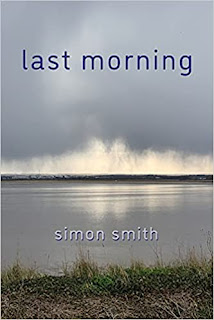 To whet the appetite, here are a few lines from the first poem in this book:

the atrocities wear on
like weather
noise filled with noise

the word is late
the work is late


and some from a poem that is about halfway through:

and, for good measure and for the sake of balance, some from the final poem:


Probably I should know if there is a technical term that covers what’s happening in lines like these, or if it is all one thing: straight repetition (noise/noise) or using words that are very similar (word/work) and whatever ‘seal’ and ‘conceal’ are up to. If there is one word that covers these similar and/or related strategies (or rhetorical devices, if you will) Simon Smith should be able to tell us what it is. As Reader in Creative Writing at the University of Kent he must know what he’s doing.

This ‘method’ or ‘style’ or whatever you might like to call it is very noticeable in this book. In fact, it’s noticeable to the point of my being driven to thinking, God, if only it wasn’t so noticeable . . . To be precise, it occurs in 63 of the 64 poems. The single exception must have been an oversight.

I suppose the poet, or someone cleverer than I, could explain what this strategy or device achieves, or perhaps they could explain why it appears to be the force driving the poems. One of the overblown blurbs gracing the back cover would have it that “a precision of word choice” matters, which of course it does, this being poetry. I thought precision of word choice in poems was a given. (The blurb also mentions “an ethics of seeing and hearing”, but that’s just more guff.) Whether or not the same device(s) is/are effective when used so relentlessly is perhaps for the reader to decide. If it’s ‘meaningful’ its meaning escapes me, and it becomes more than a tad tiresome over the course of 146 pages, and long before one gets as far as the final page.

This of course leads me on to the next point: here are 146 pages of poems that more or less without exception look the same and sound the same. Frankly, a bit of variety wouldn’t hurt, on the off-chance it would compensate for a lack of wit and personality, though that might be a bit of a long shot. Sometimes I simply don’t know who is expected to read this kind of book, and wonder if it isn’t just one more title to add to the poet’s CV. Universities like that kind of thing, and students might also be quite impressed. At least, thanks to ‘print on demand’, the use (or waste (you choose)) of paper is kept (almost) to a minimum.

Having got all that off my chest, what of the poems, beyond their all looking and sounding much the same?

Well, because of the form the poems take – short lines in little groups of 3 lines or 2 lines or even a single line, and lines often of only a couple of words – a poem like the first here, “Post-Political Love Poem” sprawls over two and a half pages instead of one and the reader is tasked with connecting the elements of the sprawl. It’s not always easy:

a broad day glows
with dead battles
& the wail of exiles

the something which truth once was
to the late World

threadbare as reportage
the holes the spaces

the poem Being
the field of living
turned open


This all sounds very worthy, and I’m not averse to a little bit of work, but since it’s no secret that the world is not a very nice place a lot of the time – which appears to be the gist of what’s being said here – I’m not sure the little bit of work that’s needed on this occasion is terribly rewarding. Incidentally, I’m not sure what to do with that ‘abode’ and ‘witness’ except skip them. They don’t seem to be doing much, and skipping them doesn’t seem to hurt the poem, so I think it’s ok to ignore them. It would not be difficult to find loads more examples of bits of poems that wouldn’t be missed if they were not there.

By the way, this is not the only time a capitalized ‘Being’ occurs in these poems. Other words that get the capital treatment in poems otherwise determinedly lowercase include Love, Live, the Sublime and Reality. Capitalization probably signifies some more meaningfulness, and these poems definitely set out to be meaningful, but they too often fall back on a phrase’s ability to sound significant when it’s left hanging in mid-air:


It goes without saying that sounding is not always the same as “Being”, although a lot of literary folk wouldn’t dare say so in public.

Leaping forward and landing at random on page 35 there is a poem called “(New Year) After Rain”, which is here quoted in full:

released into the next day
torn drawings & stars of light

already looking at a world

The sparrow and ambulance coming along after “the message in the wind” together are a decent example of a lot of what is going on in these poems: a lyric world of material things juxtaposed with an airier, fluffier sphere of abstraction, or what a more sympathetic reader might call metaphysics. But this is just one of too many curiously uninteresting and unengaging poems, and sympathy surely has to be earned. Frankly, if I wrote a poem like this after too much wine:

the deranged air
the changed air

I’d throw it away the next day, and wouldn’t expect any sympathy from anyone. Never mind that “the deranged air” echoes “”air deranged trembles” from a poem 20 or so pages earlier. A nothing of a poem is a nothing of a poem whatever the circumstances.

Sometimes it’s possible to trace in a poem a location or circumstance – I hesitate to call it a narrative – that provides some kind of context for the disjointed phrases, but it’s not a desperately interesting thing to do, because it’s likely to turn out to be a simple walk in the countryside or something equally ordinary, because poems can come from anywhere. This perhaps explains why sometimes it feels like there are too many poems, not just here but everywhere, and it wouldn’t hurt if some of them were thrown away.

Another of the blurb writers on the back cover claims Smith is in an “audible dialogue with American poets like O’Hara, Spicer, and Peter Gizzi”, but I’m not sure quite what that dialogue consists of, or if it even exists. I know little about Jack Spicer, but on this evidence Peter Gizzi has a wider range and more wit and invention than what is on offer here. If the phrase is meant to imply some kind of affinity with O’Hara we can treat it with a pinch of salt, for the two poets appear to have little in common beyond the fact that O’Hara would also often interlard his poems full of things and people and places with, for example, “depth and secrecy and mystery”. But he also , in spite of his brilliance, wrote a lot of poems that had they been thrown away it would, arguably, have been no great loss to the world. And there’s a po-faced tone in Smith’s poems here that’s the exact opposite of O’Hara’s usual demeanour even when he’s at his most melancholy, but of course he’s always a good one to mention in a blurb these days, whether it’s merited or not.