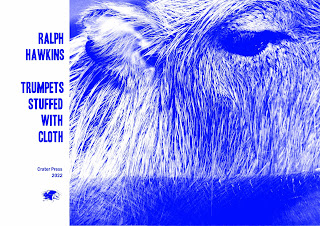 “Trumpets Stuffed With Cloth” by Ralph Hawkins and the heart of the matter, The Crater Press, 2022.

When Denise Riley’s collection of essays and poems, Poets on Writing, appeared from Macmillan Academic in 1992 it contained a little piece by Ralph Hawkins concerning his method of writing poetry: ‘A Period of Gestation’. The title of the article suggested a portion of time with the first noun and a growth through time in the second:

My poems spring from different places and have different intentions, although in many cases I only find the intention at completion or at some undocumented point along the line from onset to conclusion.

Hawkins suggested that his poems occurred ‘from a first instance…but poems are also made beyond the immediacy, although an immediacy was necessary in order to see the possibility of the poem.’ In one sense ‘these poems are in fact already written’ and they just ‘await revelation’.

In notebooks that date back to 1978 Hawkins had written ‘doodles, passing thoughts and mental journeys.’ Just as one stares at a photograph in an album, often coming to terms with recognising things that one didn’t know that one knew, the writing ‘recalls those moments’ before the creating of a poem which moves from memory to that which ‘will survive without the authority of memory’: the bearing of truths, gestation. It is perhaps to this movement that Peter Riley may have been referring when he wrote a review for PN Review 162 in 2005 in which he suggested that to Ralph Hawkins a ‘poem is in no way descriptive or reflective of self or world, but a thing entirely under its own power, a dynamic theatre which creates its own reality’. And perhaps it is exactly this which makes the poems in this new volume from The Crater Press so powerful: the power of the language is related to the way words linger in the mind long after the poem has been created and, such is that power, they linger long after the time it is first read. Such is ‘heartbeat’:

in the park with the linden

worried as she dives in the swell

The connection between ‘linden’ and ‘longing’ echoes of course Schubert’s fifth song in Winterreise where the tree stands by the well ‘before the gate’ and in the translation Ian Bostridge uses for his account of the German composer’s winter journey (‘Anatomy of an Obsession’) ‘In happiness and sadness it drew / Me back to it again and again’. The use of the word ‘tacit’ in the second line of Hawkins’s ‘heartbeat’ suggests an almost physical touchstone of unspoken longing: a silent awareness which speaks! As memory recalls what has gone there is a resurfacing time after time.

In the 1981-2 Volume 14 of Grosseteste Review Hawkins published nine poems the first of which began with ‘No Head for Heights’ and this poem was republished in the Crozier/Longville anthology from Carcanet in 1987, A Various Art:

The bridge-like framework of gantry is associated with movement having derived from the Greek kanthelios (a pack ass) whereas the lookout post is a static edifice from which to look out over long distances. In ‘heartbeat’

kept at bay in the aisle

The caution of ‘restraint’ is immediately followed by an acute sense of immediacy with both the ‘chitter’ of birds and the freshness of ‘blossom’ both of which result in ‘such rich circumstance’. That which is kept at ‘bay’ may be the static objects in a shopping mall but the word also hints at anchored ships, thoughts waiting to be released. The gap between ‘objects’ and ‘knowledge’ is of course distance and this can be both spatial and temporal: the ‘heart of the matter is where we know’. As Ortega y Gasset put it:

So many things fail to interest us because they don’t find in us enough surfaces on which to live, and what we have to do then is to increase the number of planes in our mind, so that a much larger number of themes can find a place in it at the same time.

It is no accident that when Hawkins contributed five poems to the magazine SNOW in the spring of last year one of them should have been titled ‘The Shopping Malls of Dubai’ which included the suggestion that ‘one manifestation’ would move ‘to another’. The poetry of Ralph Hawkins is always on the move restlessly discovering what takes place as ‘door after door opens’ (‘yeast’).