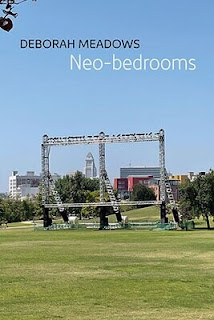 There are a couple of reasons one might be forgiven for thinking, before actually reading it, about chucking this book on the steadily-increasing pile of poetry that, if I had an open fire, might help offset the coming winter’s energy bills.

The first is that an early and very full “Acknowledgements” page announces that the poems “respond” a lot to other works probably most people will know nothing about. By which I mean:

•    “Twelve Austin Stations” is “in dialog with Ellsworth Kelly’s twelve works in the building titled Austin.”

•    The 25 parts (and pages) of “keep profane objects close, the argument” are “influenced, in part, by James Clifford’s Predicament of Culture and by other thinkers who reshaped how, and by whom, cultures are studied, disrupted, made syncretic, preserved, hybridized.”

I don’t know about you, but I missed those shows, exhibitions, films . . .  and I’m not very surprised to learn that Ms. Meadows lives in Los Angeles’ Arts District/Little Tokyo. But whatever. We all have to be somewhere. Not every poem in the book is so concerned with another art work, but those cited account for pretty much half the book, so whatever point I’m making is justified, even if only on the basis of the maths.

The second of the couple of reasons is that Neo-bedrooms adopts the not unfamiliar strategy of disjunction, disjointedness, call it what you will, if not to the extreme lengths some have taken it, but it’s still quite a long way along that road. Most of the pieces are in prose, and there’s nothing wrong with that, but it’s difficult to avoid the feeling that we’ve wandered bewildered in this territory before, and more than once. It’s that country where sentences can be a bit tricky to completely understand, and often even trickier to connect to the sentence that follows. Again, nothing wrong with any of that, though the success, pleasure, readability, whatever, rather depends upon the quality of the sentences in question.

Going back to reason the first, in the absence of any knowledge at all about the works that the poems respond to, or are in dialogue with, or once had a baby with, all we have is the poet’s words, and we have to make do with those, and only those.

So, combining reason the first with reason the second, because I’m hoping to keep this short, or shortish, here is "Twelve Austin Stations" in its entirety, the double spacing intentional:

How did the margin become wider?

A place for underground operatives.

We are framed: Malevich with white border, say.

Are we free? Has our plan run beyond this mundane doorjamb?

All deaths, as symbolic order.

Between heaven and earth; halfway there. Unrepressed laughter.

Assumption to god of clouds. Gone.

Yes, one has only the words. On the other hand, knowing that “keep profane objects close, the argument” was influenced by a book about culture allows one to read it with the vague idea of culture in mind which, frankly, helps a little bit:

Yet looking back, to me it seemed extravagant how we celebrated
tomorrow then. That others were “let in” to contrivance of cut off date,
no cipher taken as the nth.

When it became possible,
when others wrote the book.

All of this, of course, raises the question, old and tired as it is, of how one reads writings that most of the time give the reader no or next to no help or handle on how to figure out what’s going on. Of course, most readers of Litter, and regular Shearsman customers, won’t be put off by any of this, and disregarding (as I think we have to) all the “I saw this art work and wrote this poem” baggage some of the poems carry with them, the thing that distinguishes this book from others that employ the same or a similar poetics of obscurity, disjunction, and general ”this ain’t something you can skim at leisure in the bathtub” kind of approach, is that for the most part it’s quite readable.

Let me just check what I wrote there. Yes, “quite readable”. And I’m not even on medication. But actually a good deal of this is readable (subjective term) and enjoyable (even more subjective term). I've tried to figure out why, and the best I can come up with is that Ms. Meadows somehow manages to stay engaged, for the most part, with what one might call ‘real life’ by way of her language and lightness of touch. There’s often a hint of wit and wry smile not far away:

and an incomprehensible sentence is likely to be followed by a “Like Marines: Hell yeah, we will go!”, and I don’t mind that, and actually quite like it.

I really rather wanted to use some critical jibber-jabber here along the lines of ‘the poet evidently decided to use a juxtapositional and somewhat disjunctive structure expressed stanzaically in couplets and metrically through a variable pentameter line’, something I nicked from a review I read somewhere, but I will have to save that for another book I don’t understand, because these poems are mainly in prose and it’s not in the least appropriate. I’ll make do with how one of the blurb writers has it that the poems are “integrated into the flux of struggle at the borders of empire”. I wish I could say stuff like that and know what it meant, but I can’t. Over to the poet to bring down the curtain:

Please, shout at each other instead of crazy affluent-style litigation over

And why not, indeed?