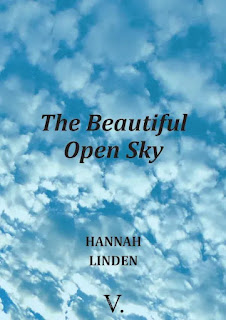 The cover image and indeed the title of this impressive debut chapbook might indicate a different kind of book altogether so readers should be aware that this is not one of those ‘everything will be alright in the end’ spiritual handbooks. It is an optimistic book though, dealing with the aftermath of troubled family relations in a sometimes oblique fashion which nevertheless hits the nail firmly on the head. Hannah’s Linden’s use of metaphor is unusual and engaging – her regular use of ‘bird imagery’ for example, is astonishing and her ‘lightly-touched’ referencing of fairy tales and childhood classics (Alice in Wonderland, Hansel and Gretel and The Tiger Who Came for Tea) is subtly impressive. I love writing that ‘takes me somewhere new’ and despite the often dark materials which abound here her way of coming at things feels new and fresh.

In ‘the Inner Monologue’ we have exactly that, the sort of self-questioning and engagement with another person which we all undertake at times in ‘our own heads.’ In this case the monologue is related to the poet’s mother as I’m assuming there is a strong autobiographical element within this writing:

I tell her ways she has hurt me

the nitty gritty   ugly   and precise

I take her around the many acres

each molehill   every canker

deserts and quarries   the sunk

pits   where the props failed

we are a long-lost from home

she has thrown away the map

blocked the roads   set out

and she leaves me here   as the sun

follows her   into tomorrow

The poem immediately following this one – ‘Self-Portrait in the Late Afternoon’ – continues the self-questioning but with a somewhat different outcome and a stunning throwaway last succinct short sentence. Here is an extract:

I’ve given up archaeology and taken up association

I always did believe in three-dimensional explanations

and the love that fills in the gaps. It’s not the strongest

when the sun forgets to rise. I hardly think of you now.

Her mix of graphic imagery – ‘the sunk pits’ for example – within an exploration of thought and feeling has a genuine link to what I’m going to call confessional poetry, something which is increasingly difficult to pull-off post Lowell and Plath, especially given the internet overload of such material, but it works here very effectively. It’s that combination I think of thought and feeling which does the trick and the careful use of language: ‘I’ve given up archaeology and taken up association’ is a good example of this.

In ‘The Whole Family Climbs Aboard the Wonky Future Machine’ we have an extended metaphor which ends with a wonderful clash of attitudes and a reference to the book’s title which manages to feel assertive and upbeat without being mawkish or sentimental: “Don’t think of the mangled bones at the bottom of the mountain. Think / of the beautiful open sky.”

From ‘Childhood’ we have the following:

The bird was lucky. She lived and I took

her to school with me. That was when

the trouble began. The teacher didn’t

understand how to teach a bird.

The blackbird tried to tell the teacher

about flying. She hopped up to the window

and sang to the sky. But the teacher

heard the song as a lie.

This mix of imagination and projection is intriguing and there is plenty more within this collection that touches on the subject of how we learn and how we fail to learn from experience and from educational norms. In ‘Mindstrap’ another ‘Mother’ poem, I think, we have some interesting wordplay based around Lancastrian colloquialisms and in ‘Dream Coat’ we get more suggestions of ‘bird imagery’ which are red in tooth and claw rather than anything more comforting, more Ted Hughes than, say, Frances Horovitz. In ‘Bird’ the opening lines are even more disturbing: “She’s bird again, the cough-up of bones / and dismantled teeth. The sky is full of metal / and she, all feathers and hollowed-out frame, / a tiny speck in a hailstorm. Where can she go?”  Anxiety and depression are subjects which Linden deals with in imaginative ways and this entire short collection is one which requires re-reading before you can really get to grips with what’s going on. It’s worth the effort though and I look forward to reading more of Hannah Linden’s work as I’m sure a full collection will only be a matter of time. Her publication record in magazines is so far impressive, an array of periodicals from Acumen, Atrium, Magma, Tears in the Fence and Shearsman, which suggests an interest in her work across the board. Meanwhile,the twenty seven poems in this intense collection are a good introduction to her work.