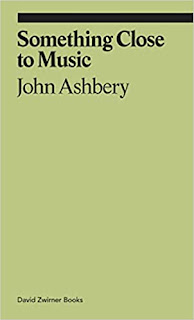 John Ashbery’s writings on the visual arts were first collected in “Reported Sightings” in 1991. Now, a selection of later art writings, following on from those in that volume, has been published in a book that seems to have pretty much slipped under the radar. At least, it slipped under mine. It was published in June this year, and I only found out about it through an announcement from The Flow Chart Foundation of what seems to have been a belated launch of sorts.

Reading about poetry that you have not read can be enjoyable or tedious. It rather depends upon the writer, but mostly it’s tedious. Similarly, reading about visual art you have not seen can be tough going, but an interesting and good writer on top form can overcome the obvious potential difficulties. Ashbery’s writing on art has always been tremendously readable. Any time he gets a bit technical about brushwork, or some other aspect of the painter’s craft you might not really understand or know much about, it flits by, as his easy, relaxed, and verging on conversational style can make you wish that every critic in every art form could be so lucid and so readable. Most importantly, he makes you want to see the art.

Here, each essay is placed alongside a carefully selected poem from Ashbery’s oeuvre and, most intriguingly, there are three ‘playlists’ chosen by The Flow Chart Foundation’s executive director, Jeffrey Lependorf. The playlists are culled from Ashbery’s extensive record collection, on the premise that it seems fairly safe to assume the chosen works were some of what he would have had playing while he wrote some of his poems. It’s a well-documented fact, of course, that Ashbery would often write with the radio or record player on, so an insight into what some of that music would probably have been is, potentially, of some interest, if only to the nerd-inclined among us.

More on the music later. First things first: the art writing here includes pieces on artists I’ve heard of and with whose work I have some familiarity (e.g. Jane Freilicher, Joan Mitchell, Larry Rivers, Joe Brainard, and Trevor Winkfield) and some I did not know, among them Rodrigo Moynihan (whose early work David Gascoyne once described as an ‘explosion in a jam factory’), Frank Faulkner (“If it resembles any contemporary school, it might be minimalism in music”), Ellsworth Kelly (“For Kelly . . . randomness is a means rather than an end.”), and Louisa Matthiasdottir (“. . . one returns to these pictures, as year after year they paradoxically both expand and simplify the world they have chosen to explore”). Thanks to Google (other search engines are available) I’ve now become acquainted with these artists’ work, albeit to a limited (laptop screen) extent.

Ashbery’s art writing has always had an interest beyond its primary subject because it’s often shed light on his views regarding the arts in general and, by extension, on his approach to poetry. It’s easy to pluck quotations from these essays and have them reflect back on to the poems.  Jeffrey Lependorf highlights a few sentences about Frank Faulkner: “The outlines are clear, in general, but there are stray paths and counter-proposals that throw us off-balance, even though on closer inspection they, too, seem to be traces of a schema so large that we see only fragments of it . . . . Meanwhile what counts for us is the gorgeous and seemingly arbitrary fluctuations of a visible dream whose roots are nonetheless deeply anchored in reason.” Lependorf adds: “Ashbery’s poetry provides similar pleasures.”

Writing of Rodrigo Moynihan, Ashbery says “But what appealed to me most was Moynihan’s habit of going about his business without asking for permission or directions,  of just doing it… Here was an artist who forced one to follow him rather than keeping one chatting at a fixed point in space and time. Everyone who is trying to create something needs to know someone like that.” In the essay about Ellsworth Kelly, Ashbery talks about work “situated somewhere between expression and abstraction.” And in an essay on Joan Mitchell he talks about how “her development is as hard to seize as a single painting of hers is hard to take in when you are looking at it: it approaches and retreats at the same time, a shimmer that simultaneously taxes and enchants one’s seeing.” Reading that, I could not help but think of Ashbery’s “Self-Portrait in a Convex Mirror”:

As Parmigianino did it, the right hand
Bigger than the head, thrust at the viewer
And swerving easily away, as though to protect
What it advertises.

And I’m allowing myself one more on Joan Mitchell: “an energy that seemed to have other things in mind than the desire to please.”

But it would be a mistake to read these brief essays primarily for what they might say about Ashbery’s poems. It’s interesting and good writing, and like listening to someone talking as together we work our way through a bottle of Scotch or a decent bottle of some other splosh : “[Larry Rivers] has always specialised in being hopeless and making it work for him. Same in his life, he’s always been a pain in the ass.” And as if to demonstrate Ashbery’s catholic tastes, one essay is about filmmaker Val Lewton, and primarily about his low-budget 1943 film “The Seventh Victim”. On the strength of the essay I downloaded and watched it a few nights ago. Ashbery’s right: it is kind of weird.

The music playlists are especially interesting. Comprised almost wholly of music described in the editor’s introduction as “complex textures, disparate sounds, and disjunct phrases” – a phrase that could be describing Ashbery’s poetry, but isn’t – I was intrigued because over the last year or two I’ve been dipping my toe into this area of music, and some of the names in these lists I was already slightly familiar with: Busoni, Cage, Elliott Carter (who, of course, composed a setting of  Ashbery’s poem “Syringa”), Arvo Pärt (one of my own recently discovered new favourites), Morton Feldman . . . but there are many others new to me – far too many to list here – and it’s given me a project for the coming Autumn evenings: I’m compiling Spotify playlists, and although sometimes I have to use a different recording or performance of a piece, a rough calculation based on the 20 hours of Playlist #1 suggests there’s easily some 60 or 70 hours worth of stuff to check out. Some of it I find quite difficult to listen to, but over recent months my ears have become more attuned to what can often be quite challenging listens, and I find a lot of it beautiful and stimulating.

Obviously, Ashbery’s tastes in music can easily (and perhaps too easily) be compared to what are generally taken to be the main characteristics of his poetry, and whether or not that adds to our appreciation of the work, or is not much more than a footnote we already kind of knew about but had not thought about as much as we might, is probably neither here nor there. Be that as it may, rifling through someone’s record collection is fun, and when it comes in a package like this it’s even better.

Anyway, this little paperback checks in at 180 pages and fits in a decent-sized coat pocket, so you can carry it around and read it when there’s nothing else to do. I picked it up off Amazon for £8 and some pennies. That’s a bargain by any standard of measurement.