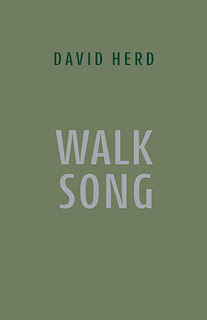 In the first of the Gifford Lectures delivered at the University of Edinburgh between 1927 and 1928 Alfred North Whitehead made a clear statement about language:

Words and phrases must be stretched towards a generality foreign to their ordinary usage; and however such elements of language be stabilized as technicalities, they remain metaphors mutely appealing for an imaginative leap.

That stretching is a process, itself a word deriving from Old French proces (a journey) and Latin prōcessus, progress. David Herd sees the stretching of language as connected with the movement of people and as the ‘Prologue’ to this humane and vitally important collection makes all too clear


This process is a ‘declaration’ of ‘solidarity’ and the Prologue introducing the six sections of this movement of people tells us that we have started out on a journey which is of both map and tongue, the sauntering (sans terre) from one place to another accompanied by the urgent need to share the tales of that wayside:

It says that we have started –
That we are starting out –
That by the oldest action
Which is listening to tales
That other people tell
Of others
Told by others
We set out to make a language
That opens politics
Establishes belonging
Where a person dwells.

This ‘Prologue’ first appeared as the opening of the Comma Press publication of Refugee Tales in 2016 and the language Herd had used in his ‘Afterword’ to that group of human tales remains vitally important to our reading of this new Shearsman collection of poems. Referring to the ‘Walk in Solidarity with Refugees, Asylum Seekers and Detainees (from Dover to Crawley via Canterbury)’, a journey of nine days in the summer of 2015 which drew structurally on The Canterbury Tales, Herd had suggested that the project possessed three fundamental elements involving a ‘culturally charged sense of space, the visible fact of human movement, and an exchange of information through the act of telling stories.’ The tales themselves gave people a voice and that in turn becomes an oral history which needs to be written down for the future: the words and phrases of Whitehead’s book that was to have such an influence on Charles Olson become that ‘imaginative leap’.

In the ten ‘Songs from the Language of a Declaration’, first published in 2019 as a chapbook by Periplum, we are presented with the contradiction of particular and abstract. Lilacs bloom against billboards and goldfinches are heard through the silence and yet the ‘mechanism / Was arbitrary’:


That open field is perhaps what Ed Dorn was referring to in his What I See in The Maximus Poems where he talked about ‘Place’ as the ‘common ground for man’. For Dorn ‘Place’ is not used as mannerism or an indiscriminate word which covers the “doings of man”:

Not in any of the senses of the usability of anything, there is no functionalism meant, we mustn’t have anything to do with arrangements put into people’s hands, with reports or accounts, at the same time not discounting it is a Place, where the din, of everything that happened there, and is, comes to the ear, and eye, the building front, the woman’s smile influenced by the school she attended etc., but that man standing at the side of the street shouting in Navajo, at the police cars, shaking his fist, going back and forth in a frenzy across the plaza to stand there, shaking his fist, screaming in abrupt Navajo, at the passing cars.

The last poem in Walksong presents the reader with the unrolling of a map in which the very act of walking unfolds ‘What people know / Strung out clear / Across the new geography’. Walking draws language back ‘To a bearing’ and establishes a rhythm


As words are spoken in the act of story-telling the roots of language are permitted to become visible as they do in a study of etymology and what we long for, as children have always known, ‘Is to hear each other’s tales’. Tales are told and then re-told from generation to generation and the importance of David Herd’s poetry of movement is to offer a different reality from the stories ‘Our officials tell’ which, after all, only reflect the truth that history is nearly always written by victors. The ‘Prologue’ to Walksong is ‘a declaration this night / In Shepherdswell / Of solidarity’ and one of the purposes linked to the world of Herd’s walking is to awake ‘the possibility of trust / In language’ and

To hear the unsaid spoken
And then repeated
Made
Unambiguous and loud
Set out over a landscape gathered
Step by step [.]

A powerful recent novel by Toby Olson, published by Occidental Square Books, Seattle in 2020, was titled Walking and it centres on the movement involved in the physical process of moving from one place to another which reflects the thrust forward from a burial in the past to an awakened awareness of the present. This movement in turn reminds one of the opening line from George Oppen’s ‘Leviathan’ (The Materials, 1962):

Truth also is the pursuit of it

In which the magpie
Chatters back
As a kind of resolution
Observed as sound
Extrapolated out
In the name of politics
Carried
As people walk
Laid out against the sun
Across an ancient track.