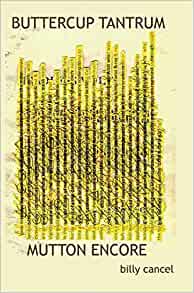 billy cancel is a Brooklyn based poet, performer and collage artist. To the best of my knowledge this is his second substantial poetry collection and he has a wide publication record in magazines in America and elsewhere. I encountered his poetry many years ago when he was living in the South West of England and am very pleased to see that his material is at last making its mark. This is a book in eight chapters and like his first collection Mock Trough Rasping Crow, each poem takes up no more than a page. The formats are varied but rarely go to more than twenty lines and are made up of fragments which are syntactically coherent and have the appearance of narrative continuity even where this is not the case. They are dystopian, linguistically energetic pieces which include a wide range of reference and work as much as ‘sound on the page’ as they do as suggestions of content.

They are vigorous and great fun to read, experimental in the best sense of the word and dealing, to a large extent, with the state of the world that we find ourselves in. Here are a couple of examples which should give any potential reader a flavour of the overall collection:

is grey energy verse a byproduct of

the dark mechanics of rhetorical flourish

pink filter?   there is a mighty great

long ditch   between our endless

who would have thought such grey energy

verse?   a direct example   is your ruthless

whirligig turned me up in NEW BOOM

TOWN where the bark has been taken

off my head of bees.   is all   this clutter

lying around   another side effect from

overheard all our nerves

in a state of protest.

Now I don’t pretend to understand exactly what is going on here but there seems to be a commentary on disputes between different kinds of poetry and it’s done in such a way that doesn’t feel overly intrusive to the actual poem. The mixing of ‘grey energy’ with ‘fashionable royal reds’ throws up a multitude of thoughts and feelings related perhaps to the conflict between ‘the puritan’ and ‘the aesthetic’ but strangely in a manner which gets away from the usual platitudes and polemics. I guess that overly fashionable term ‘nuance’ comes to mind but there is also anger here and an accumulation of materials which hints towards the writing act itself without getting in the way of the onflow of ideas and suggestive thought processing. What is ‘The Great Quarrel?’ ‘POWER HERD’ seems like a contradictory term, but perhaps not (!) and when followed by ‘overheard’ is playful. The last two lines, I would hazard a guess, enact a state of angry confusion on all side of the argument. There’s an earlier snippet of Shakespeare, a literary allusion (Macbeth, I think?) which might also imply that some of this material has its origins in found materials and points towards the idea that all writing is ‘found’ in some sense as we don’t exist in a vacuum. This sort of writing won’t appeal to everyone, I guess it’s ‘the marmite factor’ as some readers still demand transparency and clarity as keynote features but I enjoy puzzling away at ‘difficulty’ and I think I can usually tell the good stuff from that which doesn’t make the grade. The poem’s title itself suggests the conflict which follows through.

From ‘FRIED DIAL’ we get the following:

at the Speed of Snot I swallowed the PUCK

to avoid getting glossy   blue all over

straight from work trying   to integrate

once you were a   minstrel dragging

2 barrels of fun when   you got

kissed by sante fe and turned into a

imitate the squeal of a rabbit    this game will

already be in the refrigerator   a closed off room where

joe is going elvis   getting handed a bum

steer   ending up in the unshadiest

of spots     besides this

off kilter giggle soup   I have nothing to add but

I love the mixing of vocabularies here, from the demotic, ‘New York?’ speak to the hints of a literary ‘English’ (‘unshadiest of spots’), where the possible nightlife scene is disturbed by ‘disinformation,’ a sinister suggestion, and where ‘off kilter giggle soup’ may be both a reference to drugs and to the actual construction of the narrative, such as it is. Who knows? Yet the energy and speed of these fractured sequences pull you along in the wake of such ‘confused narratives’ which are possibly the only kind of narratives possible in a time where everyone with any sense feels on the edge of the abyss and in thrall to powerful yet unpredictable forces seemingly beyond human control.

Buttercup Tantrum Mutton Encore is a terrific read which won’t take you too long to get through though you may well be tempted to work over the traces. I hope you do in fact. The cover artwork, by the author, is a beautiful mix of colour and text, appropriate to the content and the yellow markings certainly suggest that ‘buttercup feeling.’ Highly recommended.