Review - "The Calls" by Olivia Hodgson 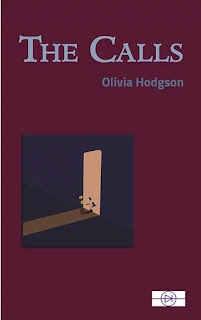 
There’s a particular kind of poem that occupies a solid and fairly substantial tract of land in the world of contemporary poetry that is appreciated by a lot of people, and a decent amount of it is very well-written, and contains sentiments and insights that probably should be applauded and admired and agreed with where appropriate. Most of the time I don’t like this kind of poetry but, even if I don’t want to read it, when it’s well done that well-done-ness should be acknowledged and accepted for what it is. But what is it?

As far as I can tell it’s written by poets for whom things that happen, or things they witness, or some kind of personal situation, make them think of things or feel things, and then they write a poem about it. For some of these poets the experience is put into poems in plain language that leaves little or nothing to be interpreted or puzzled over; for others, the experience is effortlessly (or perhaps not so effortlessly; who knows?) translated into a language that instead of saying clearly and exactly what the subject is, it’s rendered in what, frankly, has to be called ‘poetic language’. Both of these languages – the plain and the poetic – and the act of writing poems about a particular event or thing or personal situation - have the same consequence: lots of poems sound as if they could have been written by any one of lots of poets.

Here is an example of poetry using poetic language, plucked somewhat at random from the book under review. It’s a poem called “Stranger”:

I find you in the worst of myself,
on days when the colour of the world
drains into my ear, spitting cherry seeds
into the liquid peaks of the Lido.

Each splash acts as my Geiger counter:
the danger still visible even when sound
is lost under the slender rise and fall
of oars and footfall’s plaintive drum.

These are the first two stanzas of a poem that has 10 more. The language here is poetic (in inverted commas) because it’s not straight talking, it’s not things as they are, or as they were. It’s decidedly not straight. There’s “the colour of the world” that “drains” into the “ear”. You’d expect an eye, but you get an ear. And you might wonder why “cherry seeds”? Why not some other kind of seed? There is a reason, and it’s probably that someone did spit cherry seeds, but you have to assume that’s the case, because the poet isn’t going to tell you. It’s more poetic that way. At the end of the first stanza you might be forgiven for wondering if you’re at a public swimming baths. We have that “Lido”, after all. Then we get “Each splash” so we might be on the right track, but why does everything have to be so damned mysterious? And what is “slender” about the “rise and fall of oars”? Come to that, if it’s a swimming pool what are those oars doing in there? Perhaps we’re outdoors, but why not just tell us? Does it not really matter where we are? And if it doesn’t matter, why are we being asked to read about it? And what’s “plaintive” about a footfall? But this is poetry, and there must be a reason for what we might not understand, and why the poet has used those words, so we should work at it:

There’s a shudder of brick and bronze
as the bell towers lean towards you
or I or us. I do not take my eye
from behind the camera lens when it’s

you on the other side in the luminol
blue fountain. You took my papercut
finger and licked it clean, the figures
in the square a peripheral rusty smudge.

The “brick and bronze” and “the bell towers” are obviously a particular place but we’re not told what place – it’s a secret! – and when we get to the camera and the story of the “papercut finger” licked clean it seems obvious that all of this is actually about something quite ordinary, a personal incident rendered poetically and opaquely - but I’m not sure why we need to know about it. Does the event merit the poetic treatment it’s getting? So far it seems like a fairly innocuous moment. I don’t dispute that the poem is well-written as far as grammar and all of that goes, and one can only hope that reading further will be rewarding:

There are moments in the mirror
when the dark bedroom has stripped us
of vision, when I must find you
with a sensitive tongue, a soft

but urgent hand. We’re flung
by the morning, wrapped tight
like netted fish at the Rialto market,
our rainbow scales rotting in the light.

Well, we’re not at the pool or the Lido now, and I don’t know about you but when I turn out my bedroom light at night I don’t think I’ve been “stripped of vision”, but this is a poem. That’s what this kind of poem does. You could call it over-writing. You could.

And so there are two people in bed next morning, “like fish” with “rainbow scales”. Don’t ask me, because I don’t know. But it all sounds quite sensitive, and very personal, and for me it’s completely uninteresting.

There’s another half dozen stanzas, but I can’t type them out. In them the poet tries, among other things, “disappearing down whorls in wood”, is “troubled by embers risen for a sun too eager for their return”, and “must leave the empty street to bathe [her] face in the stars.” All of which is perfectly and elegantly written, and for me completely uninteresting. Again. And not just because I think the poet is putting what they deem to be ‘sounding good’ above all else.

A few lines later we get “I saw then and even now my life flayed to suit your unpinnable frame.” Well, sometimes we do find ourselves in relationships that don’t work out. I think that’s the gist of it, but I’m making an intelligent guess. And I tend to think that poems about bad relationships should maybe be kept at home, in a box, under the bed. Or burned.

According to Gregory Leadbetter (Google him, unless you already know him) the poems are “beautifully achieved”. I don’t actually know what “beautifully achieved" means, but it’s a phrase that suits the poems down to the ground, because it sounds like praise in the same way that so many of the poems sound like more than they actually are: cf. When you go to bed tonight, turn out the light and be “stripped of vision”.

It may be argued, of course, that I’m completely the wrong person to review a book like this, that because I can’t stand stuff like “The June-bright flashes of palm-sized nothings spun through the zoetrope of years” I should leave it to a more sympathetic someone else. And someone else might argue that I should be prepared to figure out what lines like that actually mean, but poems should not be riddles, and I don’t think they should hide their meaning behind annoying poeticisms when there are other perfectly good words that could be used. But I know that using fancy language when the subject is quite ordinary is one way of elevating the whole exercise, and making it sound more significant than it is. Anyway, I’ve done a big part of the reviewer’s job by quoting a decent-sized chunk of a poem so you know the kind of thing you’re going to get if you buy this book, and this is not an advertisement, it’s a review, and I return to my original point:

This kind of poetry goes down really well with a lot of people. It’s been around for ages and will never go away. And this book is a good example of a good example of it. Pretty much all of the poems begin in media res or something very much like it, and the reader has to negotiate the kind of language I’ve quoted and find their way and figure out what it’s all about. And if the poem resonates with them, and they enjoy it, and are moved, then it’s good for everyone involved, and I am very happy that many people could, potentially, really enjoy these poems. That they could have been written by any one of loads of poets currently filling the pages of poetry magazines and books may be neither here nor there, though I happen to think it matters quite a lot.