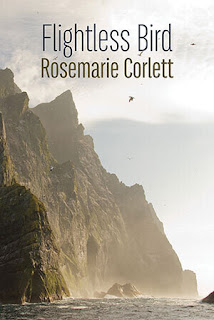 This is an intriguing collection which demands both a high level of concentration and also a degree of ‘going with the flow’ which might on the face of it appear like a hopeless contradiction. These poems combine complexity with experimentation and some wonderful linguistic inventiveness. Like Andrew Martin’s debut collection Shoals of Starlings, Flightless Bird is both an exploration of the individual psyche as well as providing a commentary on human relations with the natural world. In terms of the ecological tone of the work I’m also reminded of Jeremy Hilton’s Fulmar’s Wing, published recently by Knives, Forks & Spoons Press.

In ‘Ladies Kindly Remove Your Hats’ the cinematic imagery evokes a feeling of a reworked film noir where we have a questioning of genre allied to a dreamy soundscape which almost lulls you into sense of complacency. The opening lines – ‘Don’t put me on a pedestal / because I will let you / down…’ leads to – ‘It’s probably that I’m trying / to provoke a murder. My murder / flicks across soft millinery, bang / against the auditorium. …’ – a few stanzas later. The reference to ‘a flightless bird’ in the final stanza echoes the title as well as hinting, perhaps at Ibsen’s A Doll’s House. ‘Leda and the Ostrich’ refers presumably to both the Yeats poem and to ‘a painting in a gallery’ with some wonderfully playful, subversive language which seems to suggest a crazed form of taxidermy (I couldn’t help thinking of Psycho at this point) yet also forces the reader to up his or her game:

The beam is strong enough to change

a painting in a gallery,

a Type A oeuvre like Leda and the Swan,

into something breathtakingly bastard: half-blood

sexy fresco and oils where plaster

with paint. And the painted swan

becomes an ostrich. And all

snakes around Leda where a swan once stood:

this is the pull of your honeytrap mouth on the lip of a cup.

I search my body until I know it’s illegal

and Leda skirts a bird-beast in a painting in a gallery.

(from ‘Leda and the Ostrich’)

From ‘Flight’ we have the following opening passage which again suggests a negative relationship between our species and the natural world with a combination of irony, melodrama and surreal violence:

It was an accident.

and a duo of giant birds,

one down each engine.

First, bang into the blade root,

second across the nose cone.

And the plane slips

into a stately home.

Always the most unruined thing,

a mansion with a jet through its middle,

and all the branded napkins

up in a flurry,

the seats’ under-foam all showing,

The following ‘headline’ – ‘ONLY GARDEN BIRDS AND THE FAMILY BUDGIE SURVIVE’ – adds to the absurd nature of a depiction probably loosely based on an actual incident and the line ‘a mansion with a jet through its middle’ reminded me, incongruously, no doubt, of the sculpted shark which features in a domestic dwelling in Headington, Oxford, which has finally been ‘officially accepted’ as part of the local environment. The matter of fact nature of the above narrative, allied to such strange and unsettling imagery throughout this collection leads the reader (this reader!) into all sorts of odd byways and offbeat analogies. Surrealist influences abound and remain an effective way of dealing with trauma, global injustice and the sheer horror of real life events. Rosemarie Corlett has a knack of combining an often glamorous, seductive style with something more shocking if indirect, allusive, elusive and compelling.

To be one of your things

draped over the beach.

Wings out, on its front – a toddler napping,

And the very tip of its nose

under two white wings – a miscarriage.

to do anything again.

that I was never, ever born

There’s a strong sense of vulnerability in these lyric poems. Images of flight and flightlessness in the avian world combine with human concerns and there’s a subtle feminism underlying the themes. Flightless Bird is a terrific debut and one which requires careful re-reading as its multi-layers don’t give themselves up easily. These are poems which stimulate and make you think and which quite often take you off guard. They are also quite beautiful.