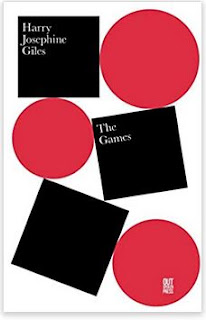 One section of this collection is called “Rules” and, according to the book’s endnotes, was initially published as “Casual Games for Casual Hikers”, and it’s kind of fun. This is “Target”:

With permanent marker, draw three concentric rings on a
patch of exposed skin.
The centre scores 20; the middle,
10, the outer 5. Encourage the midgies [sic] to bite
there. At the end of the walk, compare your scores. Winner
buys a round of Skin So Soft.

I wouldn’t say it’s great fun, but frankly there’s not enough fun of any kind around in most books of poems, so fair play to Harry Josephine.

“Rules” kicks off at page 27, and unfortunately the preceding pages (9-26) take only a minute or three to skim through. There’s something called “Chiefly in the Scottish Dialect”, which we are told was “constructed by applying Markov chain algorithms to the complete works of Robert Burns” and, in case you lost interest at the word ‘algorithm’, I can assure you it’s mainly gobbledegook, albeit with a Scottish accent.

Then there’s several pages of what I think are called ‘visual poems’, made using procedures whose explanations in the notes are marginally more interesting than the poems themselves, which is not saying much. This section is called “Fields”, and one should probably support the sentiments behind the work, although supporting sentiments is not the same as praising the poems. Apparently if one wants to make a point about the questionable relationship between agriculture and the petrochemical industry one way of doing it is to write a poem called “Quality Aspects of Carrots” which “alternates nutritional qualities with petrochemicals” and present it on the page in the shape of a carrot. Whether this is why the petrochemical giants are not quaking in their metaphorical boots is not for me to say. Anyway, all the poems in this section relate to farming and matters mainly rural, and they are all “visual”, which means you don’t actually have to read them, so that’s okay.

The main thrust of this collection – and, on this evidence, of Harry Josephine Giles‘s work in general - seems to be threefold i.e. (1) to do stuff that would once have been thought ‘unpoetic’ but now isn’t, (2) to demonstrate a quite laudable love of language, and (3) to make some political points. The first two of these things are not necessarily exclusive of one another, although purists may object. Add on the third, and the fact that usually these days a poet spouting the ideas here is preaching to the converted, then the politics and the poems bearing those political sentiments are rendered pretty toothless, for all their apparent brio and bravado.

The section called “Erasures” is a few pages of erasures that might remind you of the big black blank page in “Tristram Shandy”, though these pages have more words on them but less wit. Then there’s 4 pages of a poem called “The Following Content is Acceptable” which is words scattered across the white space of the pages, all of which words are from . . . actually, I can’t be bothered to copy and type out any more of the notes to say where they’re from. They’re from some legal opinion about pornography, so there you go.

A critic might argue that a poem called “Abolish the Police” has made its point in the title, that nothing else is necessary, and that the piece is more of a gesture than a poem. No doubt it’s a popular item at readings – I suspect ‘performances’ would be a better word - but a poem bearing that title would be far more interesting if it had nothing to do with the police at all. But this is a body of work that knows what its audience will enjoy, and is not much interested in defying expectations unless they are the expectations of aged and remote-from- the-real-world members of, for example, the Rees-Mogg wing of the Conservative party.

Elsewhere, a section called “Translations” has poems that hurt your head to read:

and which are footnoted with extensive glossaries that one might, or might not, wade through. A love of language and words is evident here, but readability of that language and those words, and whether or not this is the best way to convey the wonders of the lexicon, can be debated elsewhere.

There are a few more ‘conventional’ poems lurking in among all of this, though they are outnumbered by all the other fun and games. “Home-Charm” has a charm that is all the more notable for its absence elsewhere:

And with the potion write
your true name in the place
where you need shelter: a wall,
a window, or your missing chest.
I cannot promise you it will work.
I can promise your name will glow.

The charm goes missing again in the next poem, that begins

I blew you up, fuckers

Harry Josephine Giles seems to be doing alright career-wise if the book’s cover blurbs are anything to go by, and this collection will go down well with the audience it knows it’s aiming at. And at least it’s not full of the usual dreary stuff most other books of poems are full of. And it doesn’t take long to read, which is always a plus point.