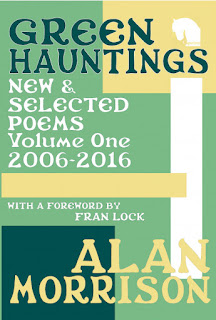 This is a short review or rather preview of a book fresh off the press from Caparison. I love Alan Morrison’s poetry which I’ve been reading for some years now and it’s good be acquainted with his earlier material which I’ve not previously come across as well as picking up again on more familiar territory. His earlier work is often metrically precise and you could say predictable but again it’s good to follow the development and get an idea of how this came about. His work is unapologetically socialist but it’s a socialism of the heart as well as the head and amid the sometimes didactic fulminating there’s a gentle soul at the centre of this body of work and one whose vulnerability, in all senses of the word, shines through. There’s certainly a ghostly aspect to some of the material here, in the sense of an early interest in the gothic but also in Marx’s sense of the spectre of history at the heart of things. Morrison’s referencing is vast and catholic and the way, in his more mature writing, in which he embraces a wide range of reading is both inspiring and somewhat singular, especially for someone of his age. It’s been said before, and I concur with this ‘judgement’ that his work is both ‘Miltonic’ and ‘Joycean’, praise indeed. Some have said his material is over-wordy but I love the way that his poetry sings with reference and apparently contradictory imagery. Everything is grist to his mill and there’s a joyful exuberance to his later style which offsets the sometimes dark subject matter and makes for a rattling good read. There’s a long preface by the author which packs in a lot of useful information and an equally substantial foreword by Fran Lock which adds to the context. This book contains poetry from five of his previous collections together with some additional material as a concluding section. I was slightly disappointed that there is no work from my favourite of his books, Captive Dragons (Waterloo Press, 2011) but hopefully this will be remedied in any future selection. His work is as concerned with the aesthetic as it is with the political and there’s also an element of the autodidact about him which is refreshingly confident and assertive. The fact that his learning is hard-gained doesn’t prohibit a sense of fun and it’s such irrepressible excess which often bubbles over, especially in his longer-lined poems, that really hits the mark with me. He mainly manages to embrace theological issues without tipping over into straight didacticism and the breadth of his reading and referencing in any case tends to direct his poetry away from preaching though you wouldn’t dare call it postmodern and he has a certain polemical trait which sometimes comes to the fore. I’ve gone on long enough but here’s a single, perhaps untypical, example from a singular voice which will hopefully encourage further reading. Hardy, Clare and Manley Hopkins are certainly influences here:

Sharp-listening twitcher in the thickets,

—shy as the skies, ungraspable in grass,

Be fast as racing waters, fast

ready to rear up for sporting box

No shelter from nature’s laissez faire;

no safety in numbers, only in pairs,

no place to rest save an ill-hid nest

never-still; no time to pay, save, hate;

only the flitting shimmer of sun

darting all your days till time-light

nibbles down your tall dapper ears

Lay down your wicker-light skull

bound liberated into the unthreading

of those stitched-on amber eyes.